Bartholomew Ogbeche was the highest goal-scorer of the season

The 2021-22 edition of the Indian Super League was all about nonstop, end-to-end action with a flurry of goals. While the veteran heroes in the likes of Bartholomew Ogbeche and Igor Angulo once again justified their reputation, new additions like Daniel Chima Chukwu also made a name for themselves.

Let’s check out the top five strikers of the season:

Though Bengaluru might have had a disappointing 2021/22 campaign, Brazilian striker Cleiton Silva has proved why the management’s decision of retaining him was perfect. He scored nine goals in 19 matches and also had three assists in his game.

The 35-year-old scored two goals against Jamshedpur and NorthEast United, whilst he netted once against Mumbai City, Goa, ATK Mohun Bagan, Chennaiyin and Odisha. Silva’s assists came against the Highlanders, the Mariners and the Marina Machans.

Daniel Chima Chukwu had a pretty mixed season, having started on a whimper but finished on a high. He was initially brought to India by East Bengal, but partly because of poor service and partly because of his own subpar performance, the stint with the Red and Golds turned out to be disastrous. The Nigerian striker played ten matches for the Kolkata giants and scored only two goals – both of them coming in a defeat against Odisha.

However, he turned things around emphatically after switching allegiance to Jamshedpur. Chukwu scored eight goals in eleven appearances, which interestingly includes another brace against Odisha, while he also got an assist in a game against Mumbai City. His performances helped the Red Miners win their first-ever ISL League Winners’ Shield. 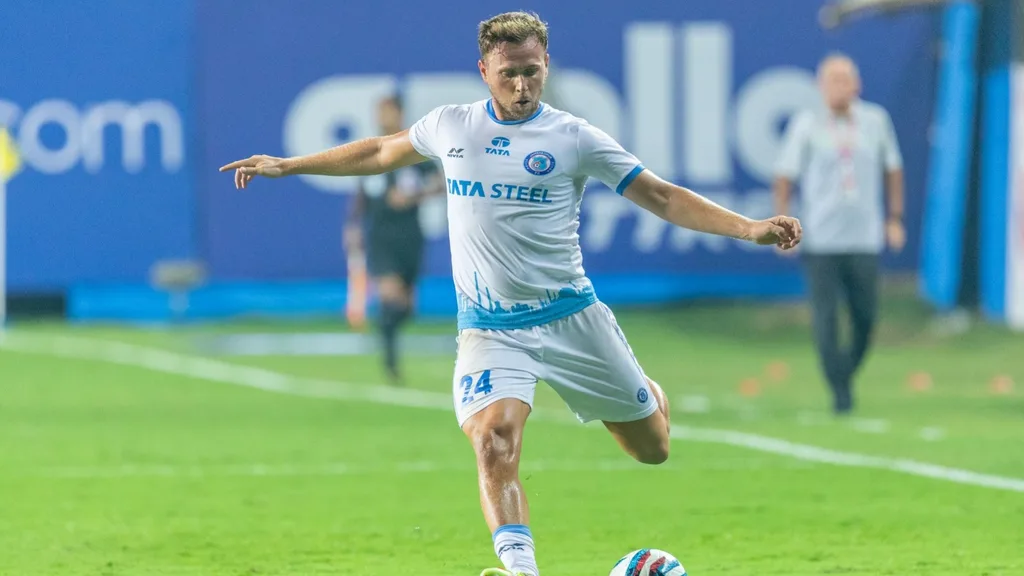 Greg Stewart scored a worldie in a match against Kerala Blasters

Greg Stewart could easily be called the best acquisition of the season, as he played a crucial role in Jamshedpur’s Shield triumph after joining from iconic Scottish club, the Rangers. He scored ten goals and assisted as many in his 21 appearances.

Stewart netted a hat-trick against Odisha, whilst he also scored braces against Kerala Blasters and Mumbai City. Three of his assists came against the Kalinga Warriors, while the 32-year-old was also on song against Goa and NorthEast United.

Igor Angulo had a pretty disappointing campaign if we are to judge him on the basis of his team’s performance, as 2020/21 champions Mumbai City failed to even make it to the semi-finals. However, from his personal perspective, the Spanish goal-machine was pretty much on the money, having scored ten goals and assisted a couple in his 19 games.

The Bilbao-born player scored three braces – against Goa, NorthEast United and Odisha, while he also scored in the other meeting against the Kalinga Warriors. Angulo was also seen at his usual rhythm against ATK Mohun Bagan, Bengaluru and Jamshedpur, but it is the second half of the season where he lost his sheen.

The highest goal-scorer of this competition, Bartholomew Ogbeche was unstoppable once again this season, as he bagged 18 goals in 20 games – nearly one goal in every match. Besides that, the Nigerian marksman also had an assist to his name.

Ogbeche scored a hat-trick against East Bengal, whilst he also netted braces against NorthEast United in both meetings, and also scored a couple in matches against Odisha and Goa. The 37-year-old’s last goal of the season came against ATK Mohun Bagan in the important first-leg clash of their semi-final tie.