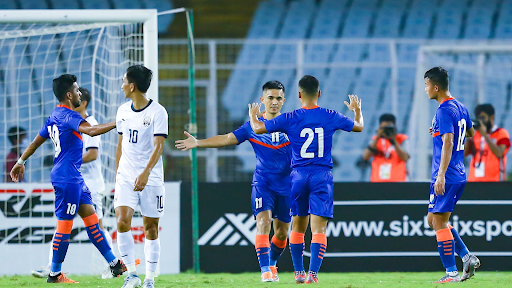 India started their 2023 AFC Asian Cup Qualification campaign exactly how they would have wanted to – with a victory. They defeated Cambodia by a 2-0 margin, with captain Sunil Chhetri scoring both goals.

Though Indian head coach Igor Stimac does not always prefer to field an attacking team, he did so on Wednesday as the boys in blue lined up in a 4-3-3 set-up. Roshan Naorem was preferred to Subhasish Bose for the left-back role, while Suresh Singh Wangjam got a place in the midfield ahead of Glan Martins.

On the other hand, Cambodia’s head coach Ryu Hirose opted for a defensive lineup, preferring to play a 5-3-2 formation. Sieng Chanthea and Keo Sokpheng were entrusted with the task of scoring goals, but given the lack of supply from the midfield, neither looked threatening in this game.

India dominated the game right from the first whistle and it took them only a couple of minutes to register a shot on target, with Roshan pulling the trigger from distance. However, his attempt was aimed straight at the Angkor Warriors’ custodian, Hul Kimhuy.

From a freekick a couple of minutes later, Cambodia did have a chance but this time around, it was the Indian keeper Gurpreet Singh Sandhu’s turn to prove his worth. The hosts then took complete control of the game and almost broke the deadlock in the 8th minute when Brandon Fernandes launched a shot, but Kimhuy was alert yet again.

However, only three minutes later, India was rightfully awarded a penalty after winger Liston Colaco was brought down inside the box by Boris Kok. The inspirational skipper, Chhetri took the responsibility on his shoulder and made no mistake in scoring the first goal of the game, and his 81st overall for his nation.

Liston tried to join the party five minutes later when he had a crack at the goal as well, but he could not beat Kimhuy either. Just after the half-hour mark, Chhetri had the chance to score his and his team’s second when left-back Akash Mishra drilled in a powerful, low cross, but the goal machine could not get his connection right this time around.

Brandon had another shot a couple of minutes later, and like this first attempt, Kimhuy denied him a shot at glory here as well. The Boueng Ket player was needed once again in the 42nd minute when Akash went for a shot, but the 22-year-old last line of defense came to the rescue for Hirose’s team for the umpteenth time. In a rare occurrence, Cambodia had a chance seconds before the lemon break when Sokpheng pulled the trigger, but his shot was directed straight at Gurpreet.

India started the second half exactly as they did in the first half and almost found their second just five minutes after the resumption. Brandon launched in a cross for Chhetri, but the skipper could not keep his header on target. 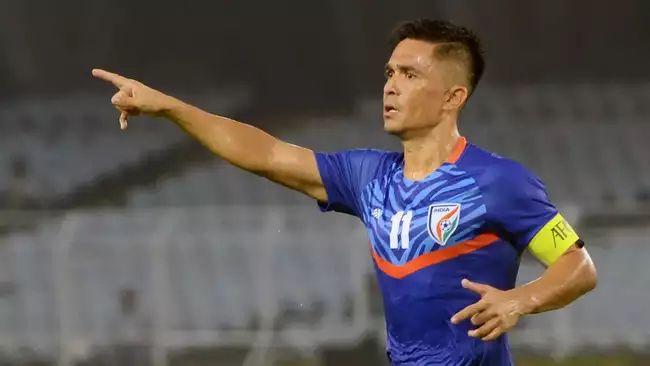 Sunil Chhetri has now scored 82 goals for his country

However, Chhetri did find the back of the net nine minutes later, and the procedure was pretty similar. The Goa midfielder, Brandon launched yet another cross, and Hirose’s defender failed to mark India’s number one marksman yet again. Having missed the first chance, the 37-year-old was never going to miss another such opportunity, and he did not.

Having found the insurance goal, Stimac shifted back to his usual defensive shell by substituting both Chhetri and Brandon. This subsequently resulted in the loss of the momentum India had, but to be fair to the Croatian manager, it does seem to be a fair call with the match against Afghanistan being only three days later.

India did get a chance in the 80th minute when Sahal Abdul Samad found Glan with a cross, but the latter could not utilize the opportunity. Another substitute Ashique Kuruniyan had an opportunity in the 87th minute when he made a darting run before finding himself one-on-one with the keeper, but like he did all day except for two occasions, Kimhuy saved the day for Cambodia. That effectively was the last chance of the match, as Stimac’s men then shut out shops, seemingly content with the 2-0 scoreline.With this win, the boys in blue are placed at the top of the Group A standings, while Cambodia is placed at the very bottom. India’s next match is against Afghanistan, which started their campaign with a 2-1 defeat over Hong Kong, while Cambodia will be taking on Hong Kong in their next assignment. Both matches will be played on Saturday, 11th June, at the Salt Lake Stadium in Kolkata.