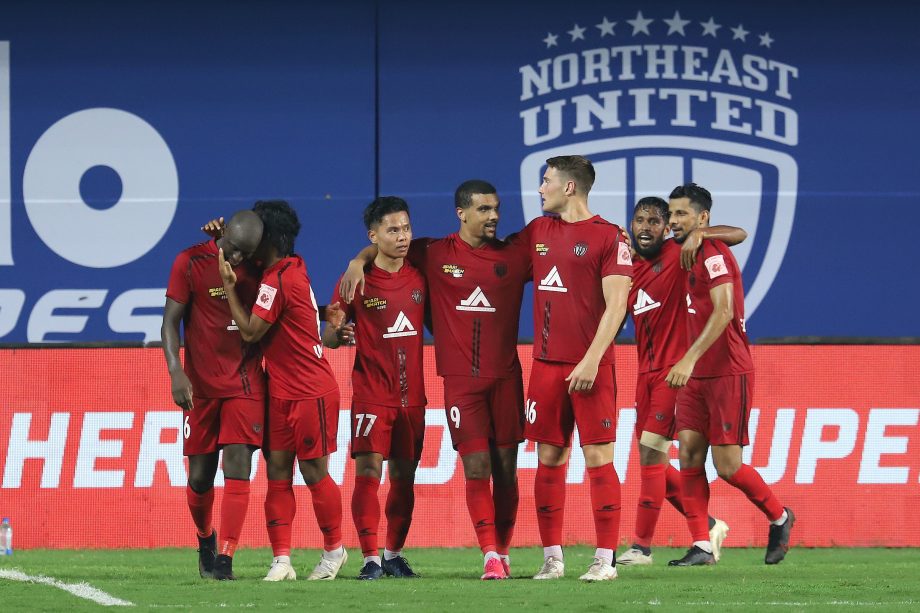 Goals from VP Suhair and Lalengmawia propelled NorthEast United FC to their eighth win of the season and helped them qualify for the semi-finals stages of the seventh edition of the Indian Super League.

The Highlanders extended their unbeaten streak to eight matches since Khalid Jamil has taken charge of the club. Jamil’s team trumped Kerala Blasters FC 2-0 on Friday courtesy of two first half goals.

The Blasters’ interim head coach Iqbal Ahmed made one change to the team that played a 1-1 draw in the Southern Derby against Chennaiyin FC while Jamil went in with the same side that beat SC East Bengal 2-1.

The match started with efforts from Luis Machado and Costa Nhamoinesu missing from close range in the first six minutes. After a substantial silent period of the match, VP Suahir latched onto a through ball from Khassa Camara before beating Sandeep Singh and rounding off Albino Gomes to finish in an empty net.

In added time in the first half, Lalengmawia, better known as Apuia received the ball on the left flank and the 20-year old showcased great dribbling skills. While cutting in, he produced a thunderous effort that rifled into the crossbar and bounced over the line to produce a top contender for ‘Goal of the Season’.

In the second half, Deshorn Brown could have tripled his side’s lead but he unluckily hit the crossbar and later on, Vicente Gomez went close with a free-kick but Kerala never came close to even pull off a consolation goal at the end of a disappointing season for the club.

Dark horses NorthEast United FC’s journey could be easily defined in three phases over the season.

The completely overhauled squad started their 2020-21 season of the ISL with a win over Sergio Lobera’s Mumbai City side and completed a double over them later in the season when Lobera’s men were top of the table. The Guwahati-based side started the season with a six match unbeaten streak that also included a win against Robbie Fowler’s East Bengal.

The streak ended with a 1-0 loss to Owen Coyle’s Jamshedpur. The 1-0 loss to the Red Steels started a five match winless streak for the Gerard Nus managed team which got the head coach sacked midway in the season.

Khalid Jamil took charge of the team on 10th January and the Highlanders haven’t lost a match since then winning against top-table teams ATK Mohun Bagan, Mumbai City, and Jamshedpur. Jamil’s side also completed a double over Kolkata giants and centenary clubs SC East Bengal.

The win over Kerala Blasters sealed a semi-finals spot and might even win the team an AFC Cup spot for next season if Hyderabad FC win against FC Goa on Sunday.