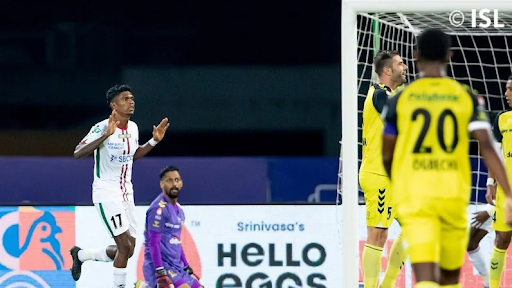 Liston Colaco was on target against his former employers

ATK Mohun Bagan extender their unbeaten run as they defeated league leaders Hyderabad by a 2-1 margin in ‘Match 85’ of the 2021-22 Indian Super League season. Liston Colaco and Manvir Singh were on target for the Green and Maroons, while Joel Chianese scored the Nizams’ lone goal.

On the other hand, Hyderabad head coach Manolo Marquez brought back Chinglensana Singh to the starting XI with Nim Dorjee Tamang dropping to the bench.

The Mariners had a bright start as Hugo Boumous pulled the strings in the early exchanges of the match. The French midfielder could have had an early assist when he played a brilliant through ball for Manvir in the 9th minute, but the Nizams’ custodian Laxmikant Kattimani came rushing out of his lines to collect the ball safely.

Ten minutes later, Boumous struck a fierce long-ranger which took a deflection off Chinglensana but Kattimani was once again up to his task as he came up with a brilliant save to keep the scoreline at 0-0.

It was 29 minutes on the clock when the Nizams got their first real opportunity. Chianese drilled in a dangerous low cross which was cleared by a green and maroon shirt but the ball landed kindly for Nikhil Poojari, who pulled the trigger and forced a great save from Amrinder Singh in the ATK Mohun Bagan goal.

Having understood that his tactics are not working on Ferrando’s team, Marquez introduced some fresh legs in the second half, in form of Mohammad Yasir and Rohit Danu. The second substitution almost paid dividends in the 51st minute as Danu launched a shot with great venom, but his effort struck the crossbar and stayed out.

It turned out to be a costly miss as only five minutes later, Liston broke the deadlock for the Mariners with a calm and composed finish. A proper counter-attack move saw David Williams making a darting run before playing a pass for Liston, who smashed his shot past Kattimani.

Last season’s runners-up scored again only three minutes later, leaving the Hyderabad camp shell-shocked. Substitute Joni Kauko delivered a good ball from the deep that allowed Manvir to run at Kattimani. Just as when it seemed that the Punjab lad will go for the shot, Manvir bamboozled Kattimani by going round him, and then slotting his shot past two defenders to double his team’s lead. 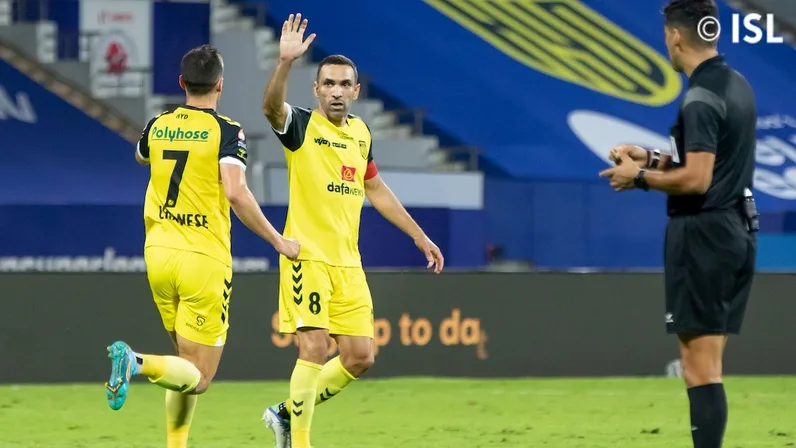 The Nizams were desperate for retaliation and eventually got their goal in the 67th minute. Joao Victor tested Amrinder with a powerful freekick which he did well to keep out but ended up punching it straight to Chianese’s path, who had absolutely no difficulty in finding the back of the net with an entire goal gaping.

Amrinder did redeem himself in the 77th minute when Yasir played a great ball for Danu whose powerful effort from close range was saved by the Mariners’ last line of defense.

Later in the 85th minute, Liston came up with a miss that goes totally against his characteristics. He made a run down the right flank before playing a pass for substitute Kiyan Nassiri, but the weight of the pass took the ball away from the Kolkata Derby hero. All Nassiri could do was pass it back to Liston, who incredibly missed an open target from a handshaking distance.

The bizarre misses continued as Hyderabad joined the party four minutes later. A brilliant cross from the left by Akash Mishra reached Danu who did well to get it under his control, but the subsequent effort lacked power as Amrinder had no trouble collecting it.

This win takes ATK Mohun Bagan to fourth place and they will now take on NorthEast United on Saturday, while the table-toppers Hyderabad will be up against Bengaluru on Friday.