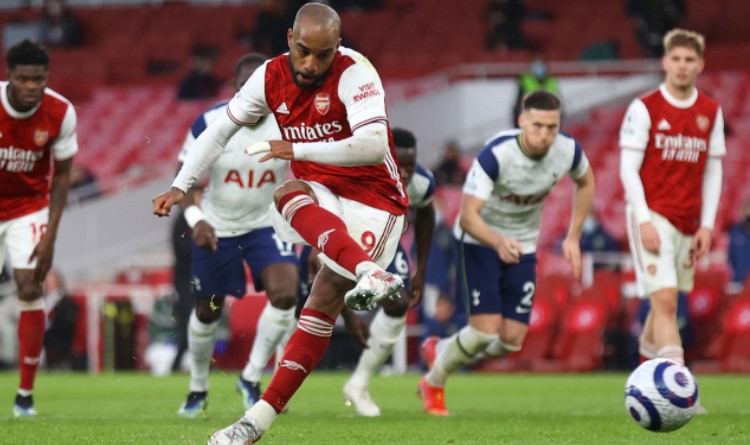 The 28th tour of the English Premier League gifted us an amusing show: Arsenal beat Tottenham (2-1) in the London derby at the Emirates Stadium.

Erik Lamela, who came on as a substitute for injured Son, opened the scoring with an absolute screamer, he shot Rabona kick just under the far post, Leno was unable to help.

Martin Odegaard, the loanee from Real Madrid, managed to equalize 11 minutes after:

Arsenal pushed hard, as they got more than 11 shots by the 60th minute (Spurs had just 1 shot on target). And, finally, luck met them: Alexandre Lacazette converted a penalty kick after Davinson Sánchez fouled him.

In the middle of the second half – in the 69th and 76th minutes – Lamela received two yellow cards and Spurs were left with ten men to play. Moreover, there was no one to attack, with only Kane and Moura remaining as attacking players.

Still, Harry Kane, the league’s best assistant, had two real dangerous chances late in the match. First, he hit the post after a free-kick, and another moment he blasted far above Leno`s goal.

Tottenham are seventh in the EPL table with 45 points, while Arsenal are tenth with 41 points.

“We had a really strong performance right from the beginning, we created many chances and went a goal down with their first shot. But I love the reaction of the team, we stayed composed and in the end we won the game. Scoring before half-time was really important as it put us in a good position for the second half. We scored the second goal, we got a bit nervy in the final 10 minutes and that is one of the things we need to improve as a team.”

The team’s captain was not included in the starting line-up, it was revealed just before the match, here’s how the head coach explained it:

“He is an incredible guy and one of the most important players in the team. He is our captain and these things happen. We have lots going on in our lives and people finding it hard with the restrictions. I will never tell anything that happens in the dressing room.”

“Lamela’s goal was sensational no doubt. But the most important thing is the result and we lost the game. Trying to be honest and pragmatic: the first half was their half. The second half: Michael Oliver and Paul Tierney, the VAR. They decided the game.”

The Gunners won the North London derby for the first time since 2 December 2018, when Spurs lost 2-4.

Since then, Tottenham have gone unbeaten against Arsenal in five consecutive matches in all competitions, winning three of them.