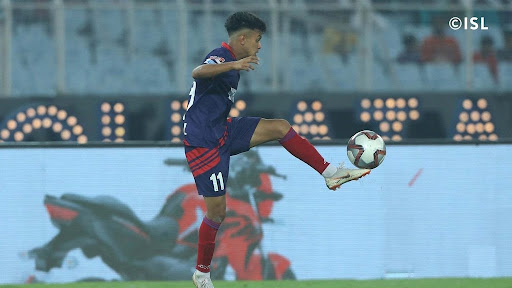 Komal Thatal trying to get control of the ball

Jamshedpur has signed young starlet Komal Thatal on a three-year contract until the end of the 2023-24 Indian Super League season.

After signing for the Red Miners, Thatal said

“I am glad to take up the challenge of fighting for honors with Jamshedpur FC. It’s an amazing club with a lot of commitment towards football development. The state of Jharkhand lives and breathes football and I know this is the step in the right direction for me. Under gaffer Owen Coyle’s guidance, I am looking to fight for success that the club and the fans crave so dearly.”

The young star rose to fame when he represented the Indian national team in the 2017 U-17 FIFA World Cup. Since then, the forward has played for the nation’s U-20 and U-23 teams but hasn’t featured in the senior national team as of now.

Thatal spent 3 seasons with ATK and made 21 appearances before making 5 substitute appearances for ATK Mohun Bagan during the 2020-21 ISL season. At Jamshedpur, the starlet would be expecting a regular role in the starting XI as the competition for places is less fierce when compared to the mighty ATK Mohun Bagan. The forward will be donning the No.11 jersey at the club.

The Jamshedpur head coach Owen Coyle feels that the club’s new signing fits in well at the club and would suit the attacking philosophy of the team.

“The way our system works needs fast, pacy players, and young Komal fulfills our requirement. His flair in attack is something that would be helpful to us and his hunger to play and win gives him the X-factor. He is one of the prodigies of Indian Football like Boris, Narender, Moba, and Jitu, and I am looking forward to work with him.”