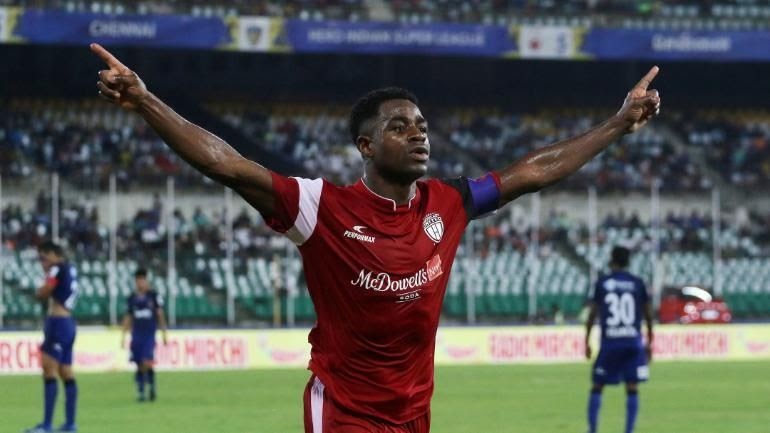 Hyderabad has signed the former Mumbai City, Kerala Blasters, and NorthEast United striker Bartholomew Ogbeche on a one-year deal until the end of the 2021-22 Indian Super League season.

After signing for the Nizams, Ogbeche said

“I am thrilled to have signed for Hyderabad FC. One could easily see from the outside that Manolo Marquez has a clear idea about his style of play and what he wants from his players, which is an admirable attribute that I find in him. I’m very excited to be playing under him.”

Before the start of the 2018-19 ISL season, the Nigerian striker joined NorthEast United and scored 12 goals in 17 matches helping the Highlanders qualify for the playoffs for the first time.

Kerala Blasters impressed with Ogbeche snapped him up ahead of the 2019-20 season and the marksman didn’t disappoint as he scored 15 goals in 16 league matches narrowly missing out on the ‘Golden Boot’ award.

Ogbeche was part of the big-money spending by Mumbai CIty ahead of the 2020-21 ISL season where he won the ISL title with the club making a total of 23 appearances in the league season, most of them from the bench. The veteran striker was a super substitute for the Islanders scoring 7 goals and providing 2 assists in less than 1000 minutes of game time.

“Ogbeche is a player that all football fans know. He has played in the top leagues in France, Spain, and the Netherlands, and even in the FIFA World Cup with Nigeria. He will be obviously an important player for our club.”

After missing out on the playoffs spot in the last ISL season, the Nizams are signing players with the pedigree of winning and the club is on the verge of signing attacking midfielder Edu Garcia.