Goa is the favorite to win this match

‘Match 70’ of the 2021-22 season of the Indian Super League will see two struggling sides in Goa and East Bengal squaring off at the Athletic Stadium on Wednesday.

Goa has not been half as convincing as they were last season which is highlighted by their current position in the league standings – 8th. They have accumulated only 13 points from 11 matches, but having said that, it seems as if they finally are finding their rhythm under the stewardship of Derrick Pereira.

Similarly, East Bengal players will also need to get accustomed to the philosophy and playing style of their new head coach Mario Rivera, who will be starting his second stint with the Red and Golds with this match. The Kolkata giants are placed at the very bottom of the table with only 6 points to their name from 11 matches.

The Goa camp can afford to be confident coming into this match since they are unbeaten in their last three matches, despite missing many key players. The Gaurs missed nine first-team players owing to a plethora of reasons in their previous outing against NorthEast United, but still eked out a 1-1 stalemate.

The match before that saw Pereira’s men handing Chennaiyin a 1-0 defeat to register their third win of the season, just six days after putting up a resilient show against Kerala Blasters in a 2-2 draw.

Though East Bengal is yet to win their first match of the season, it will be safe to say that former interim head coach Renedy Singh got a tune of the players. The Red and Golds went down fighting against Jamshedpur in the last match, as a late Ishan Pandita strike denied them their seventh draw.

Before facing the Red Miners, the Kolkata-based team played out stalemates against Mumbai City and Bengaluru. The scoreline was 1-1 against the Blues, while the match against the Islanders ended 0-0.

Goa holds the edge when it comes to head-to-head records, but only by the narrowest of margins. They have won one of the three meetings against East Bengal, with the other two ties ending in draws.

The Gaurs emerged victorious in a 4-3 thriller against the Red and Golds earlier this season. An Alberto Noguera brace, a Jorge Ortiz penalty, and an Antonio Perosevic own goal comprised the Gaurs’ four goals, while for East Bengal, Perosevic netted a brace with midfielder Amir Dervisevic also finding the back of the net. 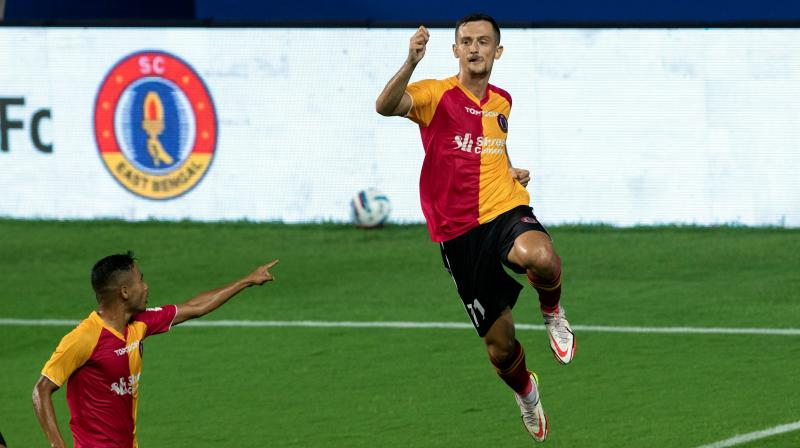 Franjo Prce could return to the East Bengal starting XI

Pereira was forced to field a weakened starting XI in the last match against NorthEast United, and the situation is likely to be the same in this match as well. After grinding out a point against the Highlanders, the Indian tactician could opt for an unchanged lineup.

However, there is room for a single tweak. Saviour Gama was not seen at his best in the last match as he got only 43 touches of the ball and could not create a single chance. He could make way for the young winger Makan Chothe.

East Bengal has made two foreign additions to their squad in the form of Fran Sota and Marcelo Ribeiro, but owing to quarantine protocol, they will not be available for this clash. However, another overseas player in Franjo Prce could be back in the starting XI after recovering from his injury.

The Croatian central defender is likely to replace Adil Khan, who sustained an injury in the previous match against Jamshedpur. Besides that, Jackichand Singh could replace Naorem Mahesh on the left side of the attack.

Goa will come into this match with momentum on their side and will be missing a few important players but should be strong enough for the challenge posed by East Bengal’s inexperienced lineup. Hence, we have predicted a 2-0 win for the Gaurs.