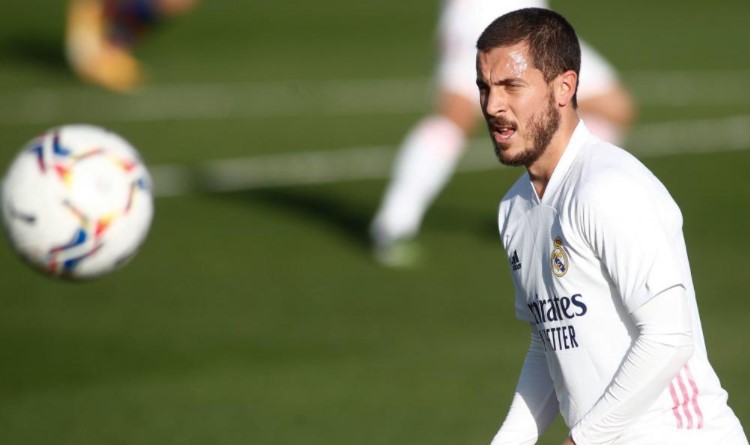 The 27th tour of Spanish La Liga brought many pleasures for Real Madrid fans: key players are back, as well as they achieved an important victory.

Firstly, it was the return of team leader Sergio Ramos. The Madrid captain missed two months due to meniscus problems that only surgery helped to resolve.

Second, a 2-1 victory against Elche, they managed to get it only in extra time.

Karim Benzema netted the winning goal (the second in that match). It lifted the 33-year-old striker to 12th place in the La Liga top scorer list. Karim’s second goal was his 184th in the Spanish championship.

But also the match was darkened by the sad news that we found out today.

Hazard played just 15 minutes in a match this weekend but did not take part in today’s Real Madrid team training session. It has come to light that the player has had a relapse.

“Following tests carried out today on our player, Eden Hazard, by the Real Madrid Medical Services, he has been diagnosed with a muscle injury in the right psoas. His recovery will continue to be assessed.”

The hero of the match about his teammate:

“Eden hasn’t had much luck since he has arrived. I’m sad for him because we know he’s a top player. We can help each other a lot on the pitch. He wants to show that he’s a star and we’re here to help him. I hope he gets better soon because we need him”.

It is unclear when the player will return, but it is certain that he will not be able to help his team in the game against Atalanta.