Odisha has moved to fifth position with this win

Odisha marked the commencement of the Kino Garcia era by handing NorthEast United a 2-0 defeat in ‘Match 64’ of the 2021-22 Indian Super League season with Daniel Lalhlimpuia and Aridai Cabrera getting on the scoresheet for the Kalinga Warriors.

An already depleted NorthEast United team took two further blows as Roccharzela and Deshorn Brown were declared unavailable for this match owing to injuries and the duo was replaced by Mohamed Irshad and Mapuia respectively. A couple of newly signed overseas players including Marcelinho were not available due to quarantine restrictions.

On the other hand, Garcia made four changes to the Odisha team that was handed a 2-0 defeat by Kerala Blasters in their previous outing. Lalhrezuala Sailung, Thoiba Singh, Daniel, and Aridai were handed starts, with Lalruatthara, Nandhakumar Sekar, Liridon Krasniqi, and the suspended Hendry Antonay making way for them.

The game had a sedate start with both teams lacking creative spark. The first big chance of the game fell to the Highlanders in the 16th minute when VP Suhair threaded a dangerous pass for Mapuia but the Mizo striker made a hash of it.

It turned out to be a costly error as the Kalinga Warriors took the lead in the very next minute as Aridai Cabrera completely outsmarted Provat Lakra down the left flank with his silky skills and then put in a delectable ball for Daniel who had the simplest of jobs of tucking the ball home.

The Kalinga Warriors doubled their lead five minutes later, with the provider becoming the scorer here. Aridai received a lofted pass from Javi Hernandez at the left flank and decided to pull the trigger himself. His shot lacked both power and direction but a howler by NorthEast United custodian Mirshad Michu made the scoreline 2-0.

The Highlanders came agonizingly close to pulling a goal back at the half-hour mark when Lakra went for a lofted attempt from the right flank. His effort struck the crossbar while Irshad failed to score from the rebound. Odisha could have scored their third right before the half-time break when Hernandez tried testing Mirshad with a fantastic curling free-kick but the Kerala-lad was up to the task this time around unlike the previous occasion.

Khalid Jamil’s team started the second half with renewed zeal with Irshad trying his luck barely a minute into the half but Odisha goalkeeper Arshdeep Singh had no problems keeping his effort out.

It was then the Kalinga Warriors’ turn to go on the attack as Hernandez tested Mirshad once again but there was no change in the outcome. The frenzied, end-to-end game witnessed yet another fantastic effort a couple of minutes later when Hernan Santana caught everyone by surprise with a sublime volley but his shot stayed out after rattling the crossbar. 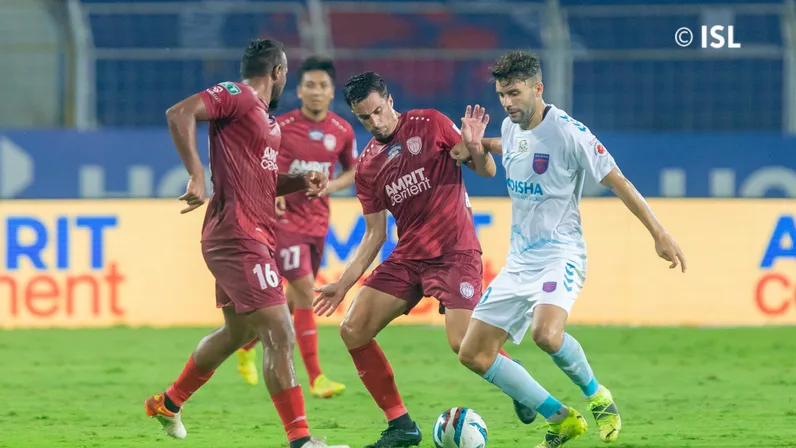 Luck was certainly not on Hernandez’s side in this match as he almost scored what would have been one of the most astonishing goals of this competition in the 61st minute. The Real Madrid Castilla graduate went for glory from a long way out but his shot missed the target by a whisker.

The best chance of the game fell six minutes later to substitute Nandhakumar Sekar. A defense-splitting through ball from Hernandez found the Indian winger through on goal with only Mirshad to beat, but his effort was directed straight at the keeper. As a concluding act, the Highlanders eventually found the back of the net in the 87th minute via Laldanmawia Ralte but an offside flag from the linesman chalked his goal off.

Odisha has taken a giant four-place leap with this win and has moved up to the fifth position in the league standings. They will now take on Hyderabad on 27th January while the tenth-placed NorthEast United will be up against Chennaiyin on Sunday.