South Korean team, DRX was crowned champions of the League of Legends World Championship on Saturday following a dramatic 3-2 victory against T1 in the eSports competition final in San Francisco.

Many League of Legends fans expected the all-Korean LCK winter Worlds 2022 final to go in T1’s favour. However, DRX clawed their way through, and, against all odds, edged them out 3-2 in a thrilling best-of-five series.

The fourth-seeded LCK underdogs, DRX, started their journey in the Play-ins, adding another shocking upset to their streak. After qualifying for the Knockout Stage, they then went on to defeat Edward Gaming, the Worlds 2021 champions, by a 3-2 scoreline in the quarterfinals, and the LCK Summer champion, Gen.G, by a 3-1 score in the semi-finals.

DRX was pitted against T1 in the final, where former Mapo High School mates, Lee “Faker” Sang-hyeok and Kim “Deft” Hyuk-kyu found each other on opposite sides of the Rift. They debuted at the same time in 2013, and almost 10 years later, Faker has three championship titles to his name while the other had none. And now, Deft has finally achieved his lifelong dream and won his first-ever world championship with DRX.

During the final, T1 dominated game one, and Faker led the way with his signature champion, Azir. Top-laner, Choi “Zeus” Woo-je, and Lee “Gumayusi” Min-hyeong were also having a good time with their respective champions, Yone and Varus. These three champions were also key in helping T1 push past JD Gaming in the semifinals one week ago.

In game two, DRX remained undeterred and drafted Heimerdinger to provide support a second time for Cho “BeryL” Geon-hee and continued to empower mid-laner Kim “Zeka” Geon-woo on Sylas. This time, the key difference was that they were on the blue side, allowing them to pick Varus first. T1 responded with Ashe and Lux support.

At the 45-minute mark, T1 started Baron and even managed to secure the Ocean Dragon Soul. But, DRX smartly approached the 4v4, with Hwang “Kingen” Seong-hoon’s Camille coming in from the top side, while Hong “Pyosik” Chang-hyeon’s Viego piercing from the other.

Meanwhile, Deft’s Varus was positioned in the jungle across the river, completely untouched throughout the fight, which allowed him to create maximum damage. After taking down four, they ran straight down the middle to even out the series. 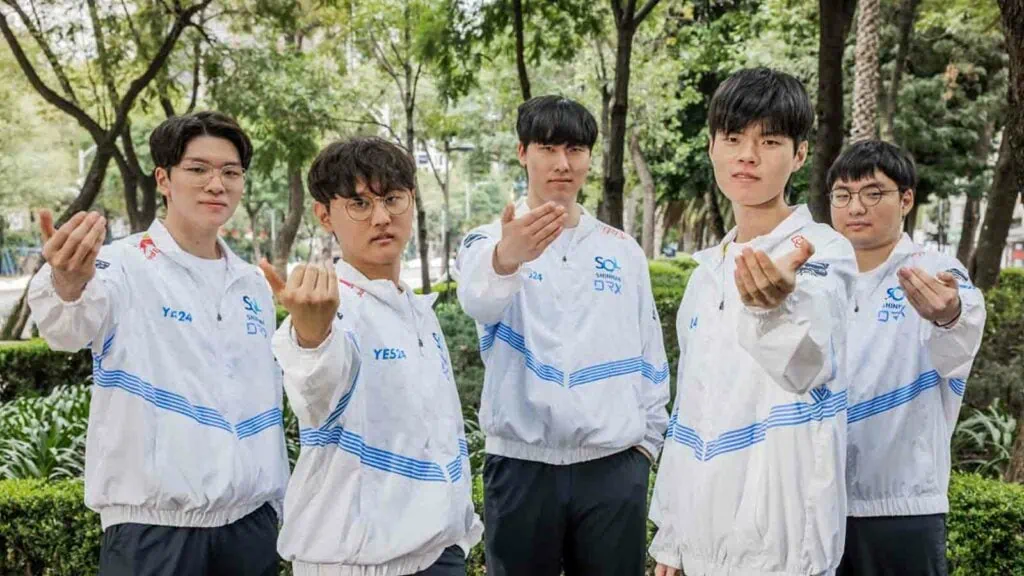 Game three was probably the most intense moment of the finale, one that T1 certainly did not anticipate. DRX was in control of the game, leading in kills, however, in the 24th minute, while playing, with Smite available and Kalista on their team, out of nowhere, jungler, Mun “Oner” Hyeon-jun, strolled into the pit and smited it.

With the buff, T1 swung the tempo and gold in their favour. Six minutes later, DRX committed to the second Baron, but Pyosik struck early and had no coordination with Deft again. At the very last second, Lee “Gumayusi” Min-hyeong’s Piercing Arrow stole it a second time.

LoL viewers wondered how disoriented DRX might have felt after that move, but they managed to stay composed based on their performance. They kept calm and carried on a slow and steady game four. This time, Zeka got his hands on Azir, while Deft continued playing Varus alongside BeryL’s Renata Glasc.

T1 innovated with Soraka support, which was a strong pick in the laning phase. Despite shutting down DRX’s bot lane early, Pysoik’s Maokai, Kingen’s Aatrox, and game-changing ultimates from Zeka led them to a decisive 28:44 win, the fastest game in this series.

Game five went surprisingly in DRX’s favour even though they were down to silver scraps. T1 picked Karma first, giving two power picks over to DRX on red. DRX chose Azir, and Caitlyn for Deft, who was unbanned for the first time in this series.

The Piltover sheriff is one of his best champions and is also the same AD carry pick that helped them overcome Gen.G in the semifinals. Looking at T1’s immobile AP carry Viktor and AD carry Varus, DRX took a calculated risk on Hecarim jungle and Bard, two champions who provided more options to access and penetrate the backline.

At the 20-minute mark, history repeated itself, DRX was doing Baron with a numerical advantage when Gumayusi’s Varus sneaked up to the pit at the last second, and blindly stole it with Piercing Arrow. Despite the ups and downs, both sides held their ground and fought hard, knowing how important this last game five was.

When Elder Dragon spawned at the 40th minute, DRX knew this was their moment to shine with Mountain Dragon Soul. T1 made the call for Oner to stay in the pit to contest it, while their AP and AD carried a teleported bot lane where a minion wave was pushing in toward the broken inhibitor in a backdoor attempt.

This time, Pyosik managed to secure the one objective that truly mattered. Zeka and Kingen rushed back to defend the base and managed to do so successfully. Collectively, the DRX team killed four T1 members and emerged victorious. Kingen was awarded the MVP for his contributions to this series. 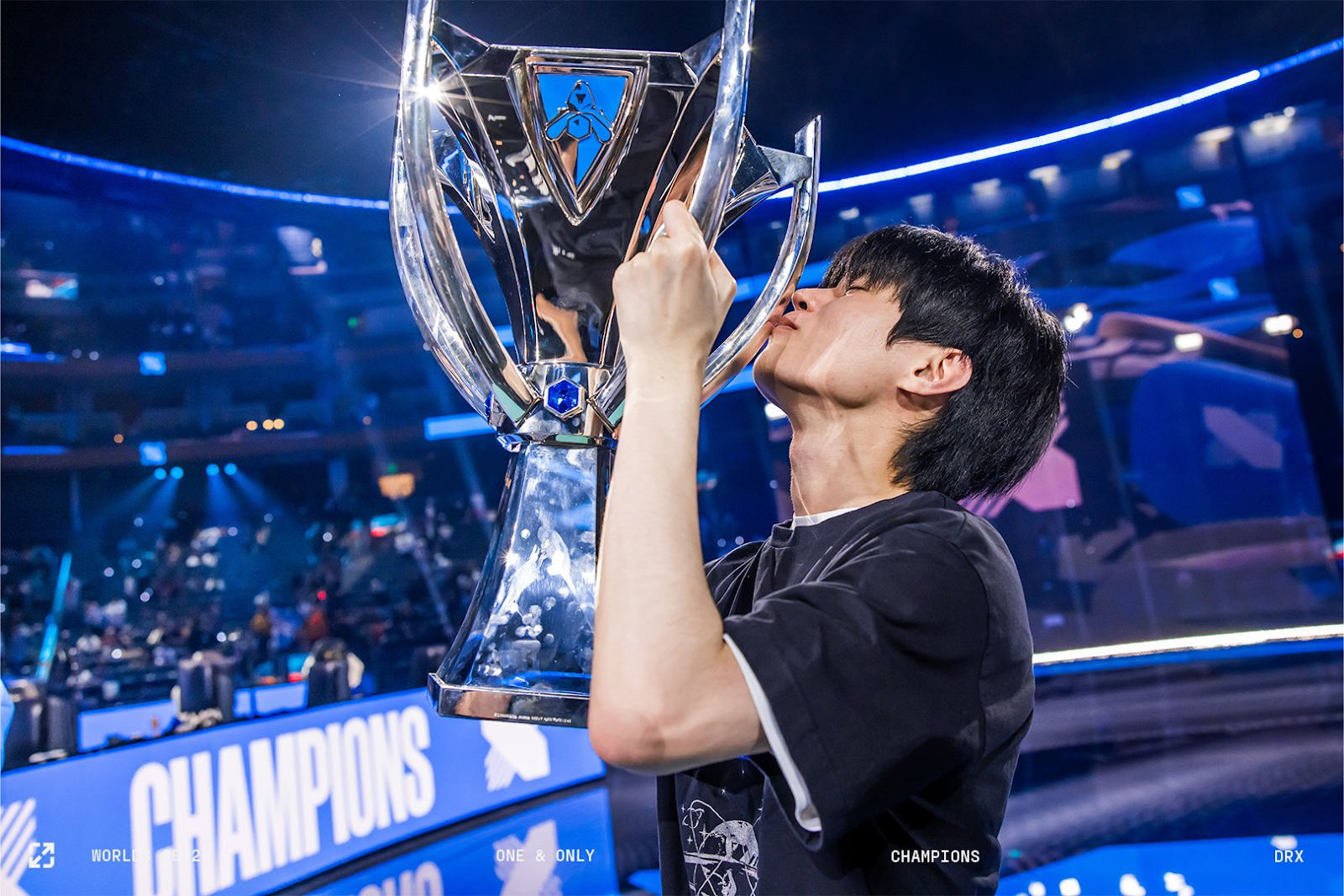 In the post-game broadcast interview, 26-year-old Deft reflected on what it meant to him to finally call himself a world champion,

“Ever since my debut, every single night I’ve been dreaming about winning the world championship. It was only a dream, but now, I’ve made it. I’m so happy right now.”

BeryL’s made it to the Worlds finals in the last three years—2020, 2021, and 2022, and claimed victory twice as a part of two different teams, DAMWON Gaming, and now DRX.

This is the first time in LoL esports history that a Play-in team has won the championship. Past winners started their journeys at the Group Stage.

The final was held in front of 16,000 people at the Chase Centre in San Francisco, home of the Golden State Warriors NBA franchise. The League of Legends World Championship is widely regarded as one of the most significant eSports competitions.