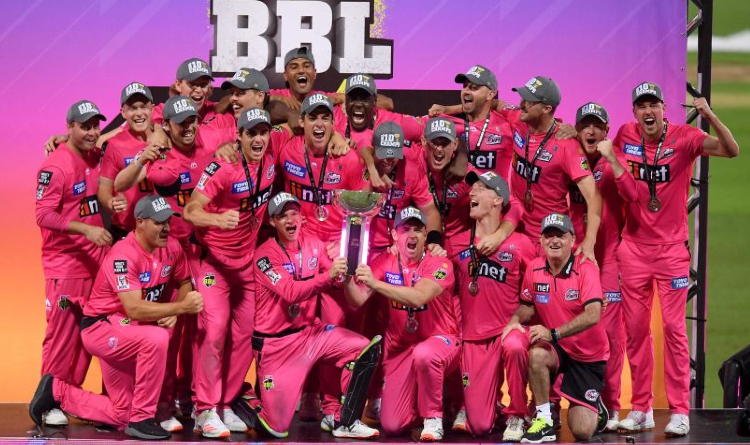 Sydney Sixers stormed to title victory in the final of the Big Bash League (BBL) 2020-21 cricket tournament, beating Perth Scorchers in the final summit clash played at the Manuka Oval in Canberra on Saturday by 27 runs. The Sixers have recorded a title victory in Australia’s premier T20 competition for the second time in a row.

Sydney Sixers posted a huge target of 189 for Perth Scorchers to win, with James Vince leading the way once again right-handed English batsman smacked three sixes and ten fours to make 95 from only 60 balls whereas the bowlers did a fine job in restricting Perth Scorchers to only 161/9 in their 20 overs.

It was an all-round show from the title-winning Sydney Sixers who were absolutely dominating on the match day. While Vince led the charge from one end with the bat, there were several others who supported him well with small but useful contributions that helped Sydney Sixers to a strong total in the summit clash. Sydney Sixers captain Daniel Kings made 13, Moises Henriques made 18, Jordan silk remained unbeaten on 17, Daniel Christian fell for 20 whereas Carlos Brathwaite contributed with 10.

It was a forgettable outing for the Perth Scorchers bowlers who had until the final had produced strong performances to carry the team in the 10th edition of the BBL. Jhye Richardson and Andrew Tye took two wickets each whereas Fawad Ahmed claimed one.

The chase for the Perth Scorchers was the botched up one as none of their batsmen could bat long and big like Vince did for Sydney Sixers. Cameron Bancroft (30) and Liam Livingstone (45) got vital runs at the top but the next best contribution came from the No  7 Aaron Hardle, who scored 26 while the others only disappointed.

Ben Dwarshuis was the key performer with the ball taking 3/37 whereas the others in Jackson Bird, Sean Abbott and Christian grabbed two wickets each.