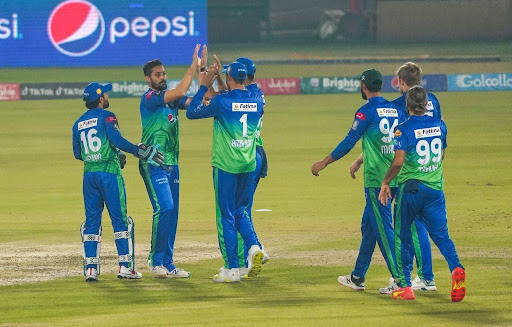 Multan won the match by 57 runs in the 13th match of PSL 7 while with the help of Rizwan, David, and Khushdil pushed Multan Sultan to 222 for three after they had been put in to bat.

Peshawar Zalmi won the toss and was elected to field first. Both the openers of Sultans were in good touch and started hitting the fine boundaries. By their bats, Runs were continuously flowing for Sultans. After the end of the first power play, Sultans went on 61-0.

Multan won the match by 57 runs in the 13th match of PSL 7 while with the help of Rizwan, David, and Khushdil pushed Multan Sultan to 222 for three after they had been put in to bat.

When Shoaib Malik finally had Masood carve to backward point, Sultans had built the perfect platform with 85 in nine overs. It gave the incoming batters the freedom to attack from the get-go, but Sohaib Maqsood’s little cameo was only a warm-up act for what David was about to unleash.

However, a holiday crowd was treated with some brutal display of batting as Rizwan scored a 53-ball 82 with eight fours and a six, David slapped six sixes and two fours in a 19-ball 51 not out and Khushdil belted three sixes in Wahab Riaz’s last over of the innings on way to a seven ball 21 not out.

Multan Sultans had set a total of 222-3 after the end of the innings.

Shahnawaz Dahani, who had a splendid comeback game after being dropped earlier in the season-struck early to remove Kamran Akmal. But Haider Ali took a shine to Anwar Ali, smacking 17 off his second over.

He even targeted Dahani with a couple of blows but last year’s leading wicket-taker had the last laugh, getting his outside edge as he attempted an uppercut. Despite 55 runs after five overs, the two wickets meant Sultans had the batter of the opening stages.

The pace and spin combination of Shahnawaz Dahani and Imran Tahir then combined to break the back of Peshawar Zalmi’s top-order as the men in yellow finished at 165 for eight after slipping to 109 for seven.

Peshawar Zalmi was never in the game as they regularly lost the wickets. Ben Cutting was the top scorer with a 31 ball 52 not out, while Hazratullah Zazai scored 43.

Sultans have clinched their fifth successive victory in the 2022 competition.

Mohammad Rizwan is the player of the match:

“I credit our manager for drafting Tim David into our team through a wildcard pick. He has been quite extraordinary for us. I feel lucky to be standing here for the man of the match award because I feel the kind of innings he played for us was game-changing. I try to play selflessly up top and think from the team’s perspective. As a player, you need to keep things simple and you have to have a clear mental approach.”