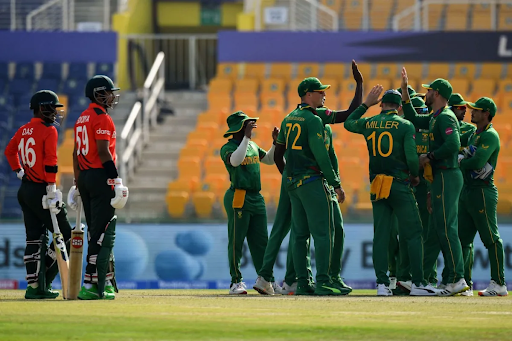 South Africa produced a dominant display with the ball against Bangladesh

South Africa moved to the second position in the points table for Group 1 in the ICC T20 World Cup 2021 with a commanding six-wicket victory over Bangladesh in their contest late on Tuesday afternoon at the Sheikh Zayed Stadium in Abu Dhabi.

South Africa’s pace attack stars in Kagiso Rabada and Anrich Nortje produced their respective career best figures in the shortest format to help their team bundle out Bangladesh for only 84, and despite their top order struggling in the powerplay, the Proteas team went past the finish line in the 14th over.

For Bangladesh, it was a forgettable outing both with the bat and the ball. Liton Das made 24 at the top of the order while spin bowling star Mahedi Hasan contributed with a vital 27 that helped Bangladesh recover from a batting collapse which saw them reduced to 45/6 in the 12th over.

Liton Das tried to provide some resistance against the raging South African fast bowlers with a calculated innings of 24 from 36 balls, during which he spent a little more than one hour at the crease and hit only one boundary. But Bangladesh were hurt by a collapse which was triggered by Rabada, who took the wickets of Mohammad Naim (9), Soumya Sarkar (0) and Mushfiqur Rahim (0) in quick succession.

On the other hand, Nortje accounted for the likes of Mahmudullah (3), Mahedi Hasan and Nasum Ahmad (0). There were as many as four ducks in the Bangladesh innings while their last batsman, Shoriful Islam, remained unbeaten without opening his account.

After bowling out Bangladesh for 84 from 18.2 overs, South Africa also had some nervous moments at the start. Reeza Hendricks was trapped leg-before by Bangladeshi fast bowler Taskin Ahmed, who also got rid of Aiden Markram for a four-ball duck. Quinton de Kock fell to Hasan for 16 whereas Rassie van der Dussen made 22 from 27 balls before he was dismissed by Nasum Ahmad.

South Africa captain Temba Bavuma made 31 not out from 28 balls with the help of three boundaries and 16 as he finished the game in the company of David Miller, who was unbeaten on 5.