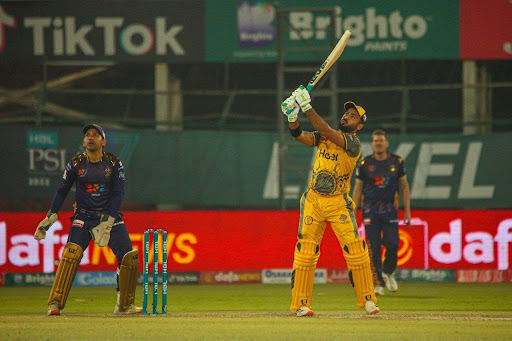 Peshawar Zalmi won the match by 24 runs with the help of Shoaib Malik and Hussain Talat who got together to revive their side by playing sensational innings and powered Zalmi to 185.

Peshawar Zalmi had won the toss and elected to bat first. Zalmi’s opener couldn’t start the innings very well. Gladiators pacer Naseem Shah had reduced Zalmi to 6 for 2 in the second. Zalmi was in total trouble and wanted someone who try to control the situation.

Then, Shoaib Malik and Mohammad Haris got together to revive their side. It was Ghulam Mudassar who break their partnership and provide another breakthrough for Gladiators.

Malik found another partner in Talat and both of them play some sensational innings by adding 73 in less than eight overs. They maintained the tempo, as Malik got to his fifty off 37 balls in the 13th over. Two overs later, Shehzad took the Malik wicket and sent him to the pavilion.

Hussain Talat, though, was playing through a delightful knock finding fine boundaries to keep the run rate up but the finishing act belonged to Ben Cutting, who got into Sohail Tanvir with four sixes in the 19th over.

The chase began devastating for the Gladiators as they lost their two wickets very early. Will Smeed lost his opening partner Jason Roy and No.3 James Vince then he started the repair work in the company of Sarfraz Ahmad, with whom he added 53.

Then, Hussain Talat had sent back Sarfraz, and Usman Qadir and Liam Livingstone had in total bowled seven overs for just 46, including a wicket each.

Smeed scored 16 in the 15th over to Wahab by smashing two of his three sixes off the seamer. But Qadir turned the screw in the next over, removing Iftikhar Ahmad and Umar Akmal in the space of five deliveries to finish with 3 for 25.

Will Smeed fell just one short of a century, as his 99 from 60 balls wasn’t enough for Quetta Gladiators to cross the line in their pursuit of 186 against Peshawar Zalmi and Gladiators lost the match by 24 runs.