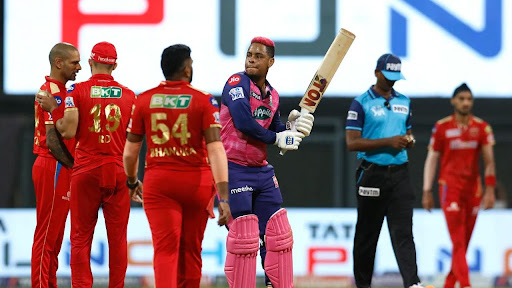 Shimron Hetmyer hailed the Rajasthan Royal’s batting depth after they chased down 190 against Punjab Kings at the Wankhede Stadium on Saturday.

Rajasthan Royals batter Shimron Hetmyer Saturday praised the team’s batting depth being the reason for a successful run chase of 190 against Punjab Kings in an Indian Premier League (IPL) 2022 on Saturday.

On a pitch that looked tough, RR got a flier after Jos Buttler made a quick 30 off 16 before Yashasvi Jaiswal laid a solid platform with his solid 68 off 41 as they sealed a six-wicket victory with two balls to spare.

“Chasing a tall 190 really shows that we have a lot of depth in our batting. There’s a lot of belief in each and every player. We are making sure we believe that we could do it,”

Jaiswal lost his wicket in the 15th over when 49 was required from 35 balls as Hetmyer played a key role in his 16-ball 31.

“This year, I’m really taking as much time as I possibly can. In the past couple of years, I just didn’t really give myself that much of a chance. this time, I’m just giving myself at least 5-6 balls and then just go from there. So far it’s been working,”

the 25-year-old said after finishing the game for his side.

He was all in praise for the 20-year-old who laid a perfect foundation with his master class innings in his comeback match.

“His (Jaiswal) knock was brilliant. I’m really happy to see him get some runs, just go out there and express himself. It was one of the best knocks that I’ve seen in a while. It was lovely to look at, I’m really, really happy for me,”

It was Jaiswal’s sheer dominance against the experienced side of the PBKS attack that stood really well.

“Jaiswal is lovely to look at. He’s really working hard in the nets, just to get a chance and express himself the way he did, I’m really a loss for words,”