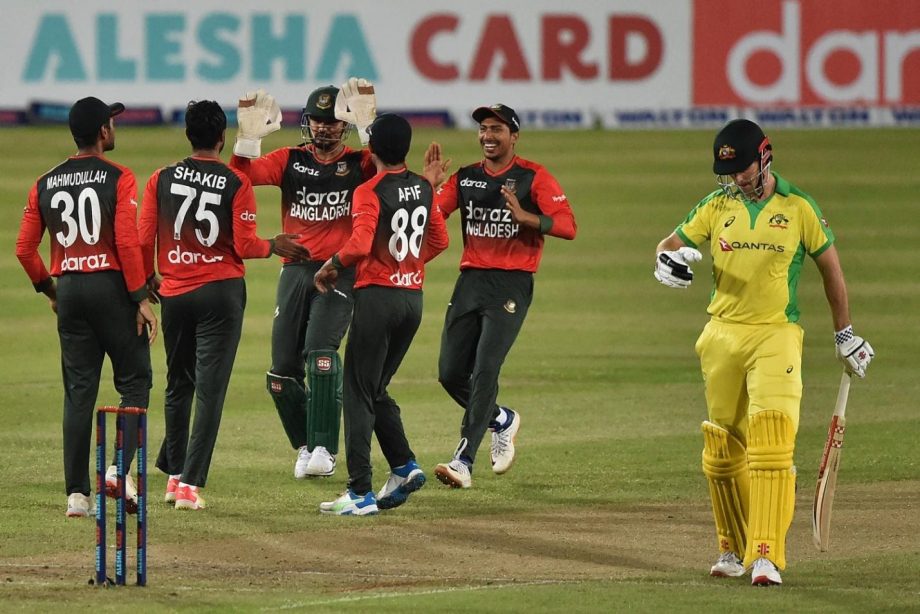 Shakib al Hasan and Nasum Ahmed starred for Bangladesh to register the first T20I victory over Australia at the Shere Bangla National Stadium in Dhaka on Tuesday, August 3.

Australia had won the toss and decided to field first. Bangladesh started the innings very well and Mohammad Naim opened the score for Bangladesh by hitting a six.

On the other end, his opening partner, Soumya Sarkar couldn’t accelerate his innings and lost his wicket in the 4th over of the innings. But Naim was in good touch and he keeps putting boundaries at regular intervals until Adam Zampa came to bowl his second over after the powerplay and took the better off him.

After the loss of two wickets, Bangladesh’s most experienced batsmen’s Shakib al Hasan and Mahmudullah were on the crease and now all hopes were on them. Both of them wanted to set a great partnership but their innings breaks down after Josh Hazlewood took the wicket of Mahmudullah and sent him to the pavilion.

After playing some good innings, Shakib also lost his wicket and couldn’t provide a good total for his team. Bangladesh couldn’t set a huge total on the scoreboard.

Bangladesh was restricted to a total of 131-7 after 20 overs.

Australia didn’t start their innings very well and lost their first wicket on the very first ball of the innings off Mahedi Hasan  who sent Alex Carey back to the Pavilion.

Australia lost the other two wickets in quick succession in the second and third over respectively. Australia wanted someone to stay on the wicket for long and Mitchell Marsh was on the crease who played very well in the recent series against West Indies and all eyes were now on him to get hold of Australia in that critical situation but Mathew Wade led-team keep losing their batsmen. Bangladesh spinners did a fine job to block the runs and they never allowed their opposition to settle at the wicket.

During Nasum’s over, Wesley Agar went too deep into his crease and was out hit wicket. Marsh plays some watch full innings but couldn’t stand his team on the winning side and lost the wicket on the 16th over.

After his wicket, Australia went on its knees. No one stood from the Australian line-up to serve the cause and they kept losing wickets one after other to bowl themselves out on 108 in the allotted overs.

“We had a team talk that we were 10 runs short, so we have to field well. It was outstanding, the hunger and energy were there. The bowlers executed their plans really well. You need to have an attacking mindset with the ball early on, that’s what we did. I’m not over the top, we’ve won, it’s gone. Now it’s time to focus on the next game and try and be on top from the first ball, try and manage ourselves, keep our feet on the ground,”

“The bowlers did a terrific job. 130 was chaseable. You lose 3-10, you need to rebuild which Mitch Marsh and I tried to do, but it didn’t work out. You need to find a way to score runs on these wickets. You’re always disappointed when you’re bowled out for 100 or so, need to find ways to score. We knew they’d bowl a lot of spin at us. If our bowlers can keep giving us 130 to chase, we will mostly find ways to score. In West Indies, the wickets spun but the skid into the wicket wasn’t there. We didn’t execute as well as we should have,”