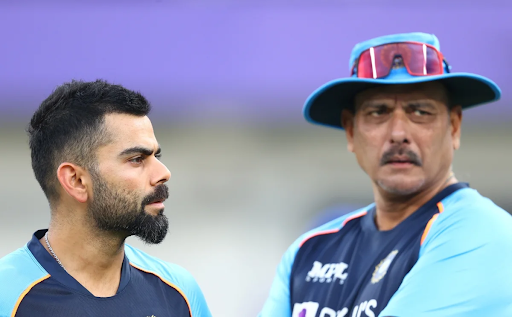 Former India coach Ravi Shastri, whose tenure ended after the ICC T20 World Cup 2021, says that Virat Kohli’s decision to stand down from captaincy across formats must be respected while suggesting that the team should not announce vice-captains beforehand.

Shastri could not have continued in his role as India’s head coach  owing to age-related restrictions and having already completed two tenures. But he went away after completing a very successful stint in which the Indian team won the Border-Gavaskar Trophy twice in Australia, the failure to win an ICC trophy is something that is always held against one of the most successful teams and its coaching setup.

Apart from twin wins in Australia, India were also leading the series in England 2-1 which was halted due to coronavirus fears mid last year.

Following the tour of England and the second leg of IPL 2021 in the UAE, Kohli announced to step down as India (T20Is) and Royal Challengers Bangalore (RCB) captain and was subsequently removed as the leader of the ODI side as well.

However, after losing the Test series to South Africa, Kohli announced that he would step down as the captain of the Indian Test side as well, a move that has created a leadership vacuum in the team which was world No 1 until recently.

“If you lose one series, you people start criticising… You can’t win every game, there will be wins and losses. How can the standard go down suddenly? For five years, you have been the number one side in the world,”

Shastri told PTI during the Legends League Cricket tournament being played in Oman.

Shastri said, reacting to Kohli’s decision to stand  down from India’s Test and T20I captaincy.

“You have to respect his decision. There is a time for everything. A lot of big players in the past have left captaincy when they felt they wanted to focus on their batting or on their cricket.”

“Whether it’s (Sachin) Tendulkar, (Sunil) Gavaskar or (MS) Dhoni. And, it’s Virat Kohli now. Many big players have not won a World Cup. That’s alright. (Sourav) Ganguly, (Rahul) Dravid, (Anil) Kumble also have not won. So can we label them as bad players?

Amid the raging debate on players who can now be promoted as captains and vice-captains, Shastri backed wicketkeeper-batsman Rishabh Pant as a long-term option. While Rohit Sharma is now India’s captain in T20Is and vice-captain in Tests, the BCCI is yet to announce full-time appointments.

”Rishabh is a tremendous young player. I say it openly, when I was a coach I was very fond of him. And he listens too. Many people say that he plays how he wants, but that’s not true. He always has the team’s interest in mind. And I’ve always seen that he reads the game well. You should always keep in mind his leadership qualities for the future.”