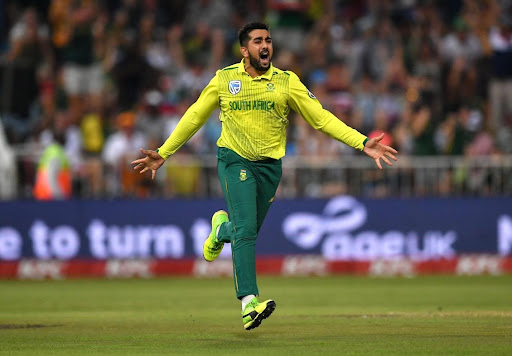 The Number 1 T20 spinner Tabraiz Shamsi has signed with Rajasthan Royals as a replacement for Andrew Tye.

IPL franchise Rajasthan Royals announced on Wednesday that they have signed World No 1 leg spinner Tabraiz Shamsi for the remainder of the season 2021. Shamsi has been replaced by the Australian pacer Andrew Tye, who pulled out of the league due to personal reasons.

The Left-arm spinner has grabbed 45 wickets in 39 T20Is. Shamsi has played four games for Royal Challengers Bangalore (RCB) in 2016. The second leg of the IPL 2021 is started In the UAE on September 19.

Tye pulled out of the tournament to spend time with his family following what has been a hectic season from one bio-bubble to another.

“It is with great regret that I have to pull out of the remainder of the IPL 2021 with the Rajasthan Royals,”

Tye said in a statement.

“It has been a long year for me which has kept me away from home for a lengthy period, and the disappointment of not making it to the World Cup squad has added to the dismay.

“Therefore, keeping my best interests in mind, I had to make this tough decision of staying at home and preparing myself mentally and physically for next year’s T20 World Cup. I am gutted that I won’t be able to rejoin the Royals family this year, but like all the fans out there, I will be cheering the team on,”

Rajasthan Royals will also miss Jos Buttler and Jofra Archer who have pulled out of IPL 2021 due to personal reasons. All-rounder Ben Stokes is also on a break from cricket to focus on his mental health is ridiculous to return to the IPL. Glenn Philips has been signed by Rajasthan Royals as a replacement for Buttler.

“New Zealand’s Glenn Philips will be joining the Royals squad for the remainder of IPL 2021 to be held in UAE from 19th September 2021. The right-handed batsman from Auckland is currently part of Barbados Royals franchise in the CPL”