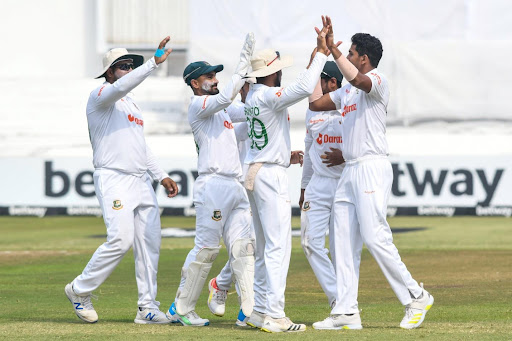 Bangladesh lost their four wickets to Shimron Harmer before the end of Day 2, trailing by 269 runs

Bangladesh lost four wickets on 98 after bowling out South Africa on 367 and the skipper Mehidy Hasan believes that his side can still go far in the Test match against South Africa, which is being played at Kingsmead in Durban.

Despite losing four wickets on 98 with a trail of 269 runs after bowling out South Africa on 367. The skipper Mehidy Hasan believes that his side can still go far in the Test match against South Africa that is being played at Kingsmead in Durban.

Bangladesh was 98/4 in response to South Africa’s first innings total of 367 as Simon Harmer claimed four wickets to his account to give complete control to his side.

”There is still a long way to go and it won’t be right to predict anything. Test cricket is like this and those who will play well will win but we still have a chance,”

Mehedy told reporters after the day’s play on Friday.

”There is Joy, Liton, Rabbi, and me and we will try to see how far we can go.

”It will be difficult for them to bat in the second innings and we are aware of it. The first innings are very important for us and there is always a chance in Test cricket we have seen batsmen at number nine scoring fifties and hundreds.

“Their spinners are getting turn; all the wickets are picked by their spinners. The ball is turning and it is getting low but if our batsmen can handle them and be mentally strong, we can go a long way,”

Mehidy picked three wickets in the first innings, added that he was mentally strong enough and that helped him in improvising his performance abroad.

”In our country, spinners get a lot of help but abroad that won’t be the case. I have tried to motivate myself mentally to do well abroad because to do well in foreign conditions you need to be mentally strong.

”I think instead of going for wickets if I can be patient and focus more on line and length chances are high that I will be successful. I spoke about it with my coach Sohel Sir during the Sri Lanka series and started working on how to do well in foreign conditions,”

”Later Herath joined and he is very experienced and working on helping us understand how to do well abroad. But the most important thing is the mental toughness,”