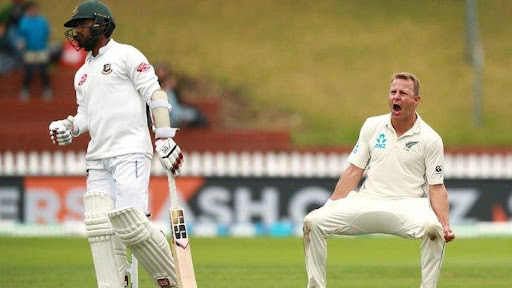 Bangladesh opener Mahmudul Hasan Joy is likely to miss the remaining tour of New Zealand following a finger injury. Hasan picked up the injury while practicing ahead of day 4 at Mount Maunganui on Tuesday.

Bangladesh opener Mahmudul Hasan Joy is set to miss the remaining tour of New Zealand following a finger injury. The right-handed opener picked up the injury while practicing at Mount Maunganui ahead of day 4 on Tuesday.

“Mahmudul got a cut injury on his right hand in between third and fourth finger while fielding and he required three stitches,”

“He will be under observation for seven to ten days. We are providing him all the medication that is required.”

Mahmudul scored his maiden Test half-century, against the recent World Test Champions New Zealand, in the first innings and was one of the main characters of the side while posting a huge total of 458 and taking a reasonable 130-run lead. New Zealand could find enough rhythm late in the day and be reduced to 147 for 5.

Bangladesh gave away a lead of just 17 at stumps and will push harder to seal their first victory in New Zealand on the final day’s play. So far the visitors have played nine Test matches in New Zealand and lost them all.

Joy was also productive at the position of the slip when he rubbed the green a couple of times as New Zealand was lucky enough to find the edges between the gaps whether it was Tim Southee or Neil Wagner.

“He (Joy) really batted well and it was a positive thing. It never looked that he is new (to international cricket) and he adapted really well. We all know he is a very good player and a member of the Under-19 champion team and he really played well there and came to the national team on the back of good performance in the domestic circuit,”

Mehidy Hasan had said after the second day’s play.

New Zealand summed up the day 4’s play at 147/5 with Will Young making 69 and Ross Taylor unbeaten on 37. Ebadot Hossain was the star performer of the day while picking up 4/39.