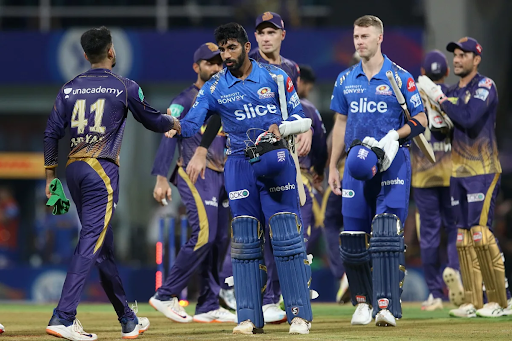 In the contest played at the DY Patil Stadium in Navi Mumbai on Monday night, Jasprit Bumrah returned with a magical spell of 4-1-10-5 to run through the KKR batting line-up, but Mumbai Indians batsmen once again turned up bad to suffer their 9th loss in 11 matches so far in IPL 2022 tournament.

Jasprit Bumrah’s five-wicket haul did help Mumbai Indians in applying the brakes on KKR’s innings, which at one stage promised them a score in excess of 200 at the DY Patil Stadium.

Kolkata Knight Riders were at one stage cruising towards a big total, for which the platform was set by the likes of Venkatesh Iyer (43), Ajinkya Rahane (25) and Nitish Rana (43).

Among the other bowlers for Mumbai Indians who took wickets were Kumar Kartikeya (2/32), Murugan Ashwin (1/35) and Daniel Sams (1/26).

Mumbai Indians were off to a poor start yet again as they lost their captain Rohit Sharma for 2 and Tilak Varma for 6 early on, and despite their middle-order trying their best in the absence of Suryakumar Yadav, they could never really threaten the KKR total.

Ramandeep Singh was dismissed for 12, Tim David made just 13 while Kieron Pollard scored 15 post which none of the Mumbai Indians batsmen could get into double digits.

Mumbai Indians’ wicketkeeper-batsman and the costliest player in this IPL 2022 tournament at INR 15.25 crores, Ishan Kishan scored 51 from 43 balls with 5 fours and 1 six but his innings was the only knock worth mentioning from the Mumbai Indians’ camp.

Australia’s Test captain Pat Cummins was the most successful bowler for KKR versus Mumbai Indians, taking 3/22 from his 4 overs while Andre Russell chipped in with 2/22. Varun Chakravarthy and Tim Southee took one wicket each.