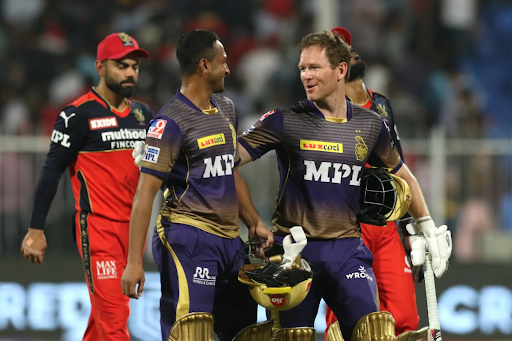 Kolkata Knight Riders (KKR) defeated Royal Challengers Bangalore  (RCB) in the Eliminator contest of the Indian Premier League (IPL) 2021 tournament on Monday night at Sharjah, breaking the hearts of many RCB fans along with that of Virat Kohli and his army of supporters.

Kohli, who had announced before the start of IPL 2021 that this will be the last season for him as captain of the RCB side, will go down in history having captained the Bangalore side for about eight years but not winning the IPL title any time.

The West Indies and Kolkata Knight Riders senior all-rounder Sunil Narine was the star of the night on Monday as he produced an all-round performance both with the bat and the ball. Narine ran through the Royal Challengers Bangalore batting line-up, dismissing the likes of Kohli (39), Srikar Bharat (9), Glenn Maxwell (15) and AB de Villiers (11) to return with the figures of 4-0-21-4.

Narine was well supported by other KKR bowlers in Lockie Ferguson (2/30) as well as Varun Chakravarthy, who went wicketless for 20 runs in his four overs, as Kolkata Knight Riders did extremely well to restrict Royal Challengers Bangalore to a small total of 138/7 in their 20 overs.

But it was a comeback performance from Kolkata Knight Riders after the opening batsmen of Royal Challengers Bangalore side, Devdutt Padikkal (21) and Kohli got off to a flier. Kohli and Padikkal added 49 runs in 5.1 overs for the opening wicket to set up a strong platform for the RCB side.

It looked like Royal Challengers Bangalore will put up a strong total on board batting first but Narine helped Kolkata Knight Riders to pull things back in control. He produced an exemplary spell of spin bowling to showcase his talent once again and play an important role for the KKR side.

Chasing a modest total, Kolkata Knight Riders never really had any problems. The opening pair of Shubman Gill and Venkatesh Iyer, who scored 29 and 26 respectively, added 41 runs in 5.2 overs and even though RCB fought back with some wickets in the middle stages, KKR always had the chase in their control.

Rahul Tripathi was dismissed for 6 but it was the pair of Nitish Rana and Narine which caused a lot of damage to the RCB side. All hopes of a fightback from Royal Challengers Bangalore were quashed by Narine once again, this time with the bat, as he smacked three sixes to make 26 from 15 balls that took KKR closer to their target.

The winning runs were scored by the pair of Eoin Morgan and Shakib Al Hasan, as Kolkata Knight Riders set up a date with Delhi Capitals in the Qualifier 2, which will be played at the Sharjah Cricket Ground itself.

Kohli, who signed off from RCB captaincy with the defeat, announced that he will continue to play for the Bangalore-based franchises as long as he is going to play IPL cricket.

Kohli said after the defeat,

“I’ve tried my best to create a culture here where youngsters could come in and play expressive cricket, play with belief. It’s something I’ve tried to do at the Indian team level as well. All I can say is that I’ve given my best. I don’t know how the response has been to that, but I can vouch for the fact that I’ve given my 120% to this franchise every year, leading the team.

“And as I said, I will continue to give that effort on the field as a player from now on. It’s a great time to regroup, restructure the franchise for the next three years, and bring in people who can take this culture and this franchise to the next level, moving forward,”