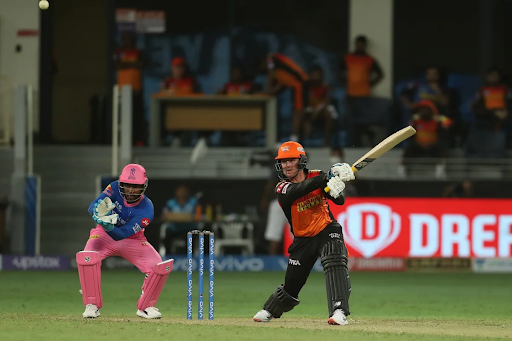 Sunrisers Hyderabad and England opening batsman Jason Roy scored a fine half-century for his Indian Premier League (IPL) 2021 team on Monday night to help his team record their only second victory in the season so far. Roy scored 60 from 42 balls whereas SRH captain Kane Williamson remained unbeaten on 51 to help their side get over the line against Rajasthan Royals.

Chasing 165 to win, Sunrisers Hyderabad finished at 167/3 in 18.3 overs. While the SRH innings witnessed two batsmen getting past the 50-run mark, it was the Rajasthan Royals captain Sanju Samson who made a brilliant 82 in the first innings early on in the contest to help his side post a competitive total of 164/5.

Roy, who was playing his first match for Sunrisers Hyderabad, had earlier replaced their former captain and struggling opening batsman David Warner, while the reports in the media claimed that the Australian might have played his last game for the IPL franchise.

The right-handed England opening batsman struck eight fours and one six to make 60 from 42 balls, an innings which deflated the hopes of the Rajasthan Royals — a win would have taken them into the top half of the IPL 2021 points table. Roy was named the Man of the Match for his innings.

Roy said that he was happy to take SRH past the finish line after spending a lot of time warming the bench and waiting for his chance. Roy said,

“(This kind of performance) makes me extremely happy. I am really grateful for the opportunity from Sunrisers Hyderabad. I have been training, and waiting hard, and I am grateful for this award too — we had some great performances today.”

“I am happy to get over the line. I had to kind of access different areas. It wasn’t as free-flowing the way I hoped. It was a case of getting the team close to the total. (Wriddhiman) Saha was instrumental in that partnership, he allowed me to relax early on. We’ve got to keep our feet very grounded. We’ve had a tough tournament, but to come out today to chase a decent total was hugely impressive. We need to do the basics all over again.”

Sunrisers Hyderabad recorded their second win in 10 matches and remained at the bottom of the IPL 2021 points table with four points, whereas Rajasthan Royals were placed at the sixth position with eight points in 10 matches which included four victories and six defeats.