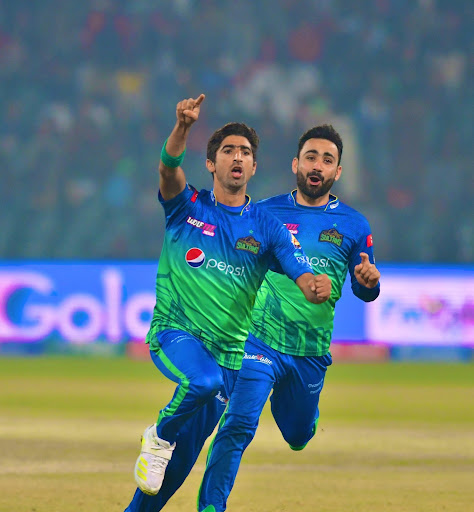 Multan Sultans eyeing their second consecutive title of HBL PSL after continuing their unstoppable campaign of the league so far after beating Lahore Qalandars by 28 runs in the 1st playoff at the Gaddafi stadium Lahore on Wednesday.

Muhamamd Rizwan-led MS marked their 10th victory in 11 matches with the margin of 28 runs against their playoffs opponent to reserve their place in the Sunday’s final at Lahore.

The skipper led from the front with 36th T20 half-century and an unbeaten 65 from 42 balls from Rilee Rossouw – part of a third-wicket stand worth 113* – took Sultans to a reasonable total of 163 for 2 in the alotted 20 overs.

In reply of the target, the tournament’s leading run-scorer Fakhar Zaman continued his charming form with 63 off 45 balls, his seventh fifty in 11 innings, but the lack of support costed LQ a defeat.

Mohammad Hafeez (0), Phil Salt (1) and David Wiese (8) all got out in single figures to put LQ hopes in trouble. From 102 for 4 in the 14th over they lost five wickets in regular intervals for only 26 runs to consign themselves to defeat.

Shahnawaz Dahani did the damage in the latter half of the innings, dismissing Harry Brook (13), Salt and Shaheen Shah Afridi (1), and taking a fine low catch to dismiss Samit Patel (11).

Each success in a wicket or a remarkable catch was accompanied by a typical enthusiast celebration by Dahani, typifying the Sultans’ display of the talent which keeps them on course for a second straight title. Dahani was star performer from MS who finished with figures of 3/19.

Qalandars, courtesy of their second-place finish in the group phase, have another opportunity to book their place in the final on Sunday after their second playoff contest from the winner of Eliminator 2 (February 25).

They will face the winner of Eliminator 1 between Peshawar Zalmi and Islamabad United for the right to face Sultans again in Lahore.

Multan Sultans eyeing their second consecutive title of HBL PSL after continuing their unstoppable campaign of the league so far after beating Lahore Qalandars by 28 runs in the 1st playoff at the Gaddafi stadium Lahore on Wednesday.