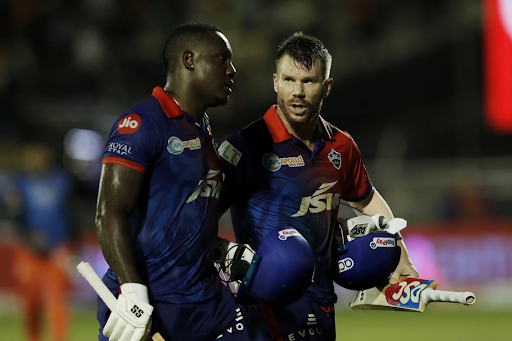 David Warner’s 92 not out and an unbeaten 67 from the West Indian Rovman Powell proved to be the match-winning efforts for Delhi Capitals (DC) against Sunrisers Hyderabad (SRH) in the Match No 50 of the ongoing Indian Premier League (IPL) 2022 tournament on Thursday night.

In the contest played at the Brabourne Stadium in Mumbai, David Warner and Rovman Powell punished the SRH bowling attack, putting on an unbeaten 122-run stand for the third wicket to take their team’s total to 207/3 in 20 overs.

In their reply, the SRH side did not throw in the towel at any point in time in their innings as despite their top order failing to fire, a resilient knock from Nicholas Pooran kept them alive till late in the contest.

Nicholas Pooran waged a lone battle of sorts for SRH against Delhi Capitals, hitting 6 sixes and 2 fours to make 62 from 34 balls and even though he never found strong support from any of his teammates lower down in the batting order, the left-handed wicketkeeper-batsman kept attacking the Delhi bowlers.

But the day belonged to Delhi and their batsmen David Warner and Rovman Powell. Playing against his former side SRH for the first time since his controversial exit, David Warner ensured that he batted through the innings to take Delhi to a strong total and make SRH realise in a way what they are missing this season.

After all, David Warner’s 92 not out was the reason SRH suffered their third consecutive loss after they had won 5 matches on the trot. SRH now have 5 wins and 5 losses from 10 matches and no surety of making it to the knockouts round, for which, even Delhi Capitals are not assured of a place.

David Warner faced 58 balls to score 92 not out with the help of 12 fours and 3 sixes whereas Rovman Powell hammered 6 sixes and 3 fours to make 67 not out from only 35 balls. Rishab Pant scored 26 from 16 balls while the others in Mandeep Singh (0) and Mitchell Marsh (10) could not make much of an impact.

The SRH side was on backfoot early in their innings as they lost Abhishek Sharma for 7 and captain Kane Williamson for 4 early on, and could not find enough from their batsmen to challenge Delhi’s command on the game. Aiden Markram once again impressed with 42 and Nicholas Pooran made 62, but they could manage 186/8 in 20 overs.

For Delhi, Shardul Thakur took 2/44 and Khaleel Ahmed took 3/30 while Anrich Nortje, Kuldeep Yadav and Mitchell Marsh got one wicket each.