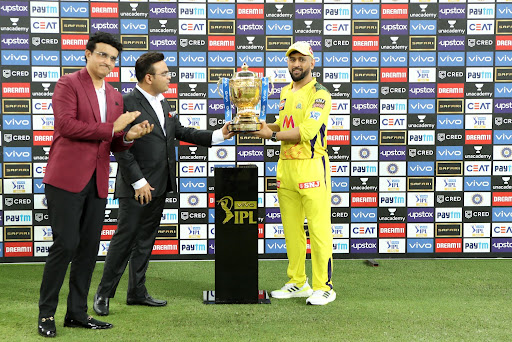 Faf du Plessis starred with a superb 86 to lift Chennai Super Kings to a monumental total of 192/3 batting first, after Kolkata Knight Riders won the toss and decided to field. Chennai Super Kings batsmen punished Kolkata Knight Riders bowlers who were absolutely brilliant in the last two matches in Sharjah on a slow and turning pitch, but struggled on a bigger ground in Dubai which had plenty for batsmen.

In reply to Chennai Super Kings’ total of 192/3, Kolkata Knight Riders scored 165/9 despite half-centuries from their opening batsmen Shubman Gill and Venkatesh Iyer. Kolkata Knight Riders were in the chase until these two batsmen at the crease, but the others failed to turn up good on the night when the team needed them the most.

KKR batsman Rahul Tripathi suffered a hamstring injury due to which the team was forced to rework on their batting line-up. The No 3 batsman Nitish Rana was dismissed for a first-ball duck, whereas Sunil Narine, batting on 4th spot, made only 2. Kolkata Knight Riders captain Eoin Morgan continued to have a poor run with the bat as he was removed by Australian fast bowler Josh Hazlewood for 4, who returned with figures of 4-0-29-2 producing a fine spell of fast bowling.

Kolkata Knight Riders suffered a batting collapse as they skidded from 91/0 to 125/8 in a matter of a few overs. Former KKR captain Dinesh Karthik made 9, Shakib Al Hasan was removed for a first-ball duck by Ravindra Jadeja whereas Tripathi, who came lower in the batting order could make only 2 runs. Towards the end, Lockie Ferguson and Shivam Mavi scored 18 not out and 20 respectively, but their efforts were not enough to take KKR even close to the target with Chennai Super Kings had set.

Shardul Thakur was also impressive for Chennai Super Kings as he returned with figures of 4-0-38-3 whereas the veteran Caribbean player Dwayne Bravo was once again brilliant in his spell of 4-0-29-1. Deepak Chahar claimed 1/32 from his four overs.

The victory for Chennai Super Kings was set up by their opening pair of Du Plessis and Ruturaj Gaikwad as the two batsmen made merry against KKR bowlers and set up a strong platform. The opening pair added 61 runs in 8.1 overs, following which Du Plessis and Robin Uthappa — who fell for 31 from only 15 balls with 3 sixes — added another 63 runs for the second wicket in only 32 balls.

After Uthappa was dismissed, Chennai Super Kings found another strong pair in the middle in Du Plessis and Moeen Ali, who both added 68 runs from only 39 balls to keep the momentum in the favour of their team. Du Plessis was absolutely brilliant with the bat as he made 86 from only 59 balls with 3 sixes and 7 boundaries whereas Moeen scored 37 not out from 20 balls with 3 sixes and 2 fours.

For Kolkata Knight Riders, Gill scored 51 from 43 balls with the help of 6 fours whereas Iyer once again impressed with the bat, cracking 3 sixes and 5 boundaries to make 50 from 32 balls. Around the halfway stage of KKR chase, it looked like the contest would go down to the wire but Chennai Super Kings bowlers Thakur and Jadeja struck twice in one over each to derail the Knight Riders and hand them the first disappointment in an IPL final.

Before this, Kolkata Knight Riders had played in two IPL finals and had one emerged victorious in both. In 2012, KKR had defeated Chennai Super Kings to record their maiden trophy win whereas the second title victory came in 2014.

All teams will now be disbanded as the Indian cricket board is yet to release the number of players franchises can retain ahead of the mega auction in IPL 2022, which will also witness two new teams being added to the competition. From IPL 2022, it will be a 10-team event.