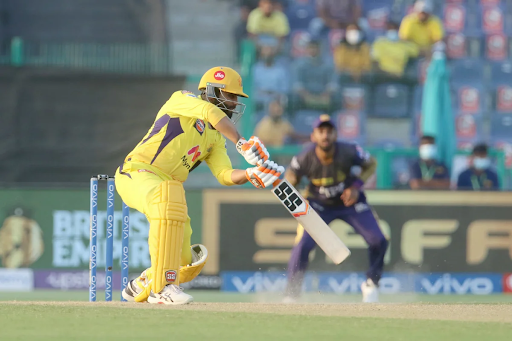 Chennai Super Kings (CSK) moved back to the top of the points table of the ongoing Indian Premier League (IPL) 2021 tournament, with a narrow but thrilling two-wicket victory against Kolkata Knight Riders (KKR) in the Match Number 38, played at Sheikh Zayed stadium in Abu Dhabi on Sunday afternoon.

Chasing a challenging total to win, Chennai Super Kings made 172/8 in 20 overs in reply to Kolkata Knight Riders’ total of 171/6 to go back to the top of the points table, where they now lead Delhi Capitals once again but only via a better Net Run Rate (NRR). CSK have an NRR of 1.069 while Delhi Capitals have an NRR of 0.711.

Ravindra Jadeja was the star of the chase for Chennai Super Kings as he smacked two boundaries and two sixes towards the ending stages of the game to snatch a victory, which was increasingly looking certain for the Kolkata Knight Riders team. Jadeja scored 22 from only 8 balls to turn the table around in a spectacular manner, and even though KKR veteran bowler Sunil Narine bowled a terrific final over, Deepak Chahar hit the winning runs to keep CSK on the top of the points table in IPL 2021.

Earlier in the contest, a study knock of 45 from 33 balls by Rahul Tripathi and healthy contributions from Nitish Rana (37 not out), Andre Russell (20) and Dinesh Karthik (26) helped Kolkata Knight Riders score 171/6 in their 20 overs after they won the toss and elected to bat first.

Australia fast bowler Josh Hazlewood claimed 2/40 whereas Shardul Thakur was the pick among the bowlers for Chennai Super Kings, as he returned with impressive figures of 4-1-20-2. Jadeja was also cheap in his spell, giving away only 21 runs from his four overs to take one wicket.

Chennai Super Kings made a strong reply to what proved to be a tricky chase against KKR. The opening pair of Ruturaj Gaikwad and Faf du Plessis added 74 runs inside nine overs to set up a strong platform, whereas the middle-order also in a way did their part.

But a flurry of wickets towards the end which saw Ambati Rayudu (10), Suresh Raina (11) and MS Dhoni (1) dismissed in quick succession, had CSK in a spot of bother, but they were rescued by Jadeja who played a splendid knock with the bat.

For Kolkata Knight Riders, Narine claimed 3/41 from his four overs whereas the others in Prasidh Krishna, Lockie Ferguson, Varun Chakravarthy and Andre Russell all claimed one wicket each.