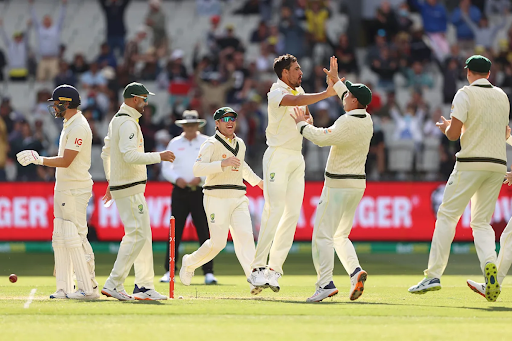 Australia were six wickets away from retaining the Ashes after stunning passage of play on the second day of the third Test being played at the Melbourne Cricket Ground on Monday. Australia had reduced England to a poor total of 31/4 in their second innings, still behind by 51 runs after James Anderson produced an incredible spell to stage a comeback for his team in a series in which they have been thoroughly outplayed.

James Anderson produced a stunning spell of 23-10-33-4 to help England limit Australia to a first-innings total of 267, giving them only 82 runs in lead after England were bowled out for a poor total of 185 on the first day of the Boxing Day Test.

Australia opener Marcus Harris scored a fine 76 but there was no other batsman who could threaten the England bowlers, particularly Anderson, who was extremely disciplined and probing around the off stump. The Australian batsmen had no answer to the line and lengths bowled by Anderson, who claimed the wickets of David Warner (38), Steve Smith (16), Pat Cummins (21) and Harris.

England did well to stage a comeback on the second day which also happened to be their best performance across three Tests of this ongoing Ashes 2021-22 series, with two more matches to go.  But as it turned out, England set to be losing the Ashes series on the third day at Melbourne after a disappointing response with the bat.

A poor batting display later on in the day washed away all the good work done by Anderson as the visitors were looking at a heavy defeat unless they turn up on the third day with something magical with the bat.

Australia fast bowler Mitchell Starc took two wickets in as many balls, removing opening batsmen Zak Crawley and No 3 Dawid Malan for a first-ball duck to reduce England at 7/2. While England captain Joe Root did well to survive the hat-trick ball against Starc, the local boy and Australia Test debutant Scott Boland took a couple of wickets in the final overs of the day to leave England struggling at 31/4.

After he found an outside edge off the bat of Haseeb Hameed to get him caught behind by Alex Carey for 7, Boland hit the top of the off stump of England night watchman Jack Leach shouldering his arms. England were still behind by 51 runs with their captain Root and his deputy Ben Stokes at the crease and the visitors were looking at a mountain to climb.