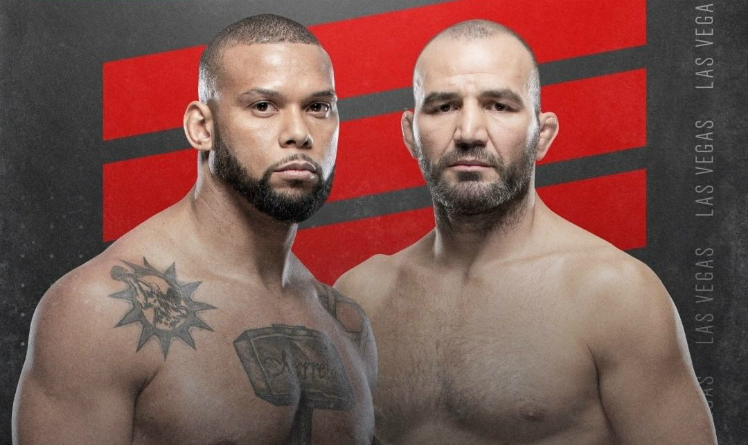 Brazilian light heavyweights Thiago Santos and Glover Teixeira will face each other at UFC Fight Night 182 in Las Vegas on November 7. How will the contest play out and who is likely to leave the octagon as a winner?

Santos compiled a record of 21-7. Marreta started his MMA career in 2010 and transitioned to the UFC 2 years later. Until 2018, he competed at welterweight and middleweight and won 10 of 15 contests. After moving to light heavyweight, Thiago beat Eryk Anders, Jimi Manuwa and Jan Blachowicz. He got a title shot last year but lost to Jon Jones by split decision. Santos is currently ranked first at light heavyweight.

Teixeira amassed a record of 31-7. He debuted in MMA promotion WEC in 2002. In 2011, the Brazilian won the Shooto South America title and signed a contract with the UFC next year. Glover had a stunning 20-fight winning streak before suffering a loss to Jon Jones for the UFC belt in 2014. He never got a second title shot ever since, but beat 4 last opponents and took third place at light heavyweight. Teixeira set a tied record for the most submission victories at the UFC 205-pound division – 5. 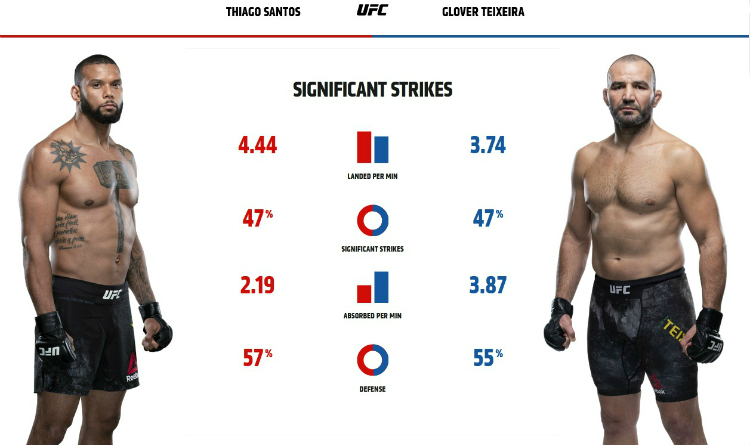 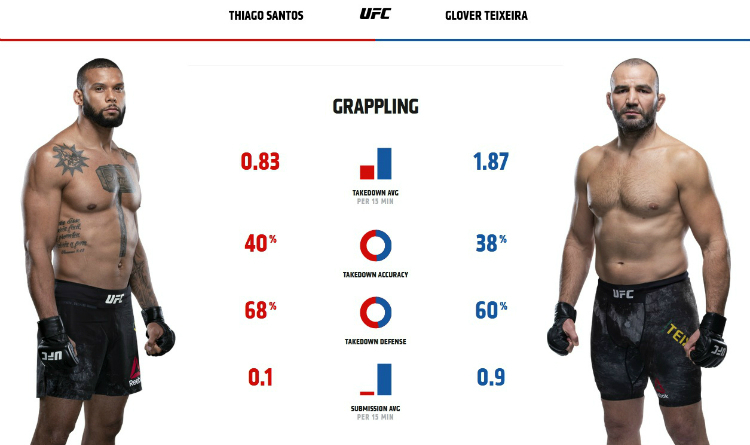 Thiago earned a black prajied in Muay Thai, while Glover got no regalia in striking combat sports. Therefore, Santos will have a great advantage on the feet. He throws more blows and his defense is crisper. Teixeira’s reflexes are not as fast as they used to be because he is already in his 40s. In the first round of his bout against Anthony Smith, Glover was late to dodge strikes and absorbed 37 heavy shots.

Teixeira has black belts in BJJ, Luta Livre and Kajukenbo. Santos received a black belt in BJJ as well. However, Glover was awarded a gold medal at the ADCC Submission Wrestling World Championships in 2009. Thus, he is a more experienced and skillful grappler. Nevertheless, Teixeira’s takedown accuracy is very low, while Santos’ defense is pretty good.

Marreta is a more explosive and technical striker. He landed almost twice as many significant shots as Jones did in a title fight. Obviously, Thiago will outsrike his opponent on the feet. Glover’s advantage lies in wrestling. But he took his rivals to the ground only in 38% of cases, while Santos blocked 68% of takedown attempts. Given these facts, Thiago has a better chance to win. Santos has a 76% finish rate, therefore, he is likely to defeat Teixeira before the bout reaches the time limit.