Ponzinibbio vs Jingliang: will Santiago be back to the UFC with a victory? 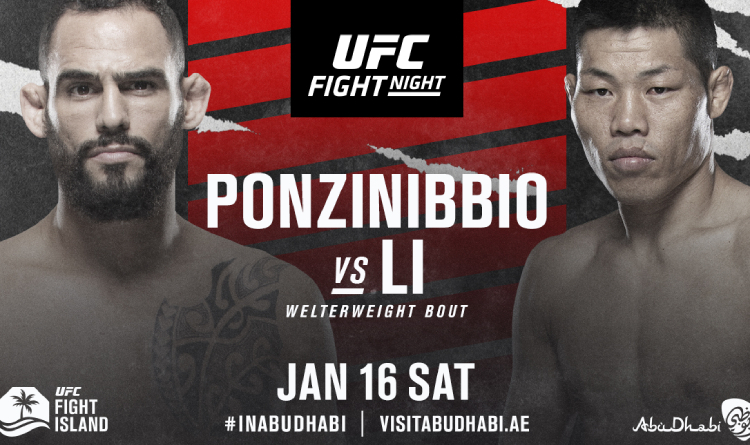 Welterweights Santiago Ponzinibbio and Li Jingliang are set to clash at UFC Fight Island 7 scheduled on January 16. Will the Argentinian be back to the UFC with a victory?

Ponzinibbio started competing in MMA as a pro in 2008 and amassed a record of 27-3. At the beginning of his career, Gente Boa had been riding on an 11-fight winning streak before suffering the first loss to Leonardo Mafra in 2011. Afterwards, Santiago beat 7 opponents in a row and transitioned to the UFC in 2012. He lost 2 of 4 first contests in the promotion, but then scored victories in 7 consecutive bouts. In 2019-2021, the Argentinian pulled out of 2 clashes due to health issues. Therefore, he has not fought since 2018 and dropped out of the UFC rankings.

Jingliang began his MMA career in 2007. His record currently stands at 17-6. The Leech earned the Legend FC title in 2013 and signed with the UFC. In the promotion, Li won 9 of 13 clashes. The Chinese has never been a title challenger, but he has received 3 bonuses for the best performance and 2 “Fight of the Night” prizes. In 2018-2019, Jingliang defeated 3 rivals; however, he dropped a decision to Neil Magny and cut off winning streak last year. 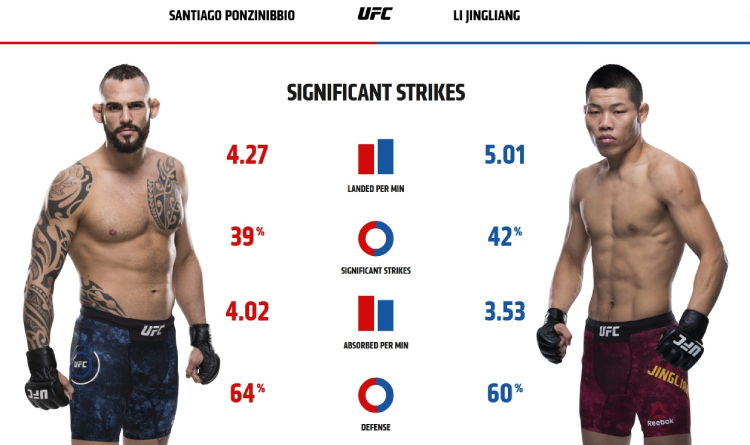 Li outnumbers Ponzinibbio’s takedowns almost 2 to 1, but his accuracy is 25% lower. 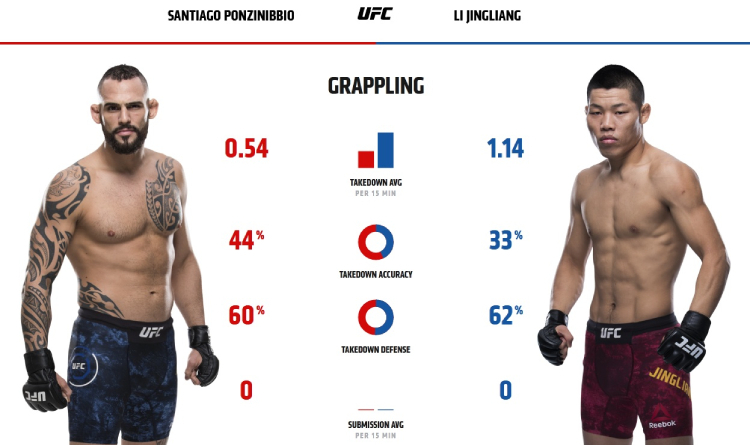 Santiago trained in kickboxing, while Li coached in Sanda. Consequently, both athletes have good striking technique and employ a wide range of shots. However, Ponzinibbio has a clear advantage in terms of hand speed and footwork. Besides, his low-kicks are much more powerful.

The fighters earned black belts in BJJ, but Jingliang competed in Chinese wrestling as well. Thus, Li has a lead in grappling at least on paper. Nevertheless, the difference in the number of takedowns landed might be attributed to the fact that Ponzinibbio initiates wrestling exchanges less frequently and prefers fighting on the feet.

The Leech has an edge on all key stats excluding striking defence. However, Li faced weaker rivals than Santiago did. Jingliang’s previous bout against Magny, who was ranked ninth at welterweight, resulted in his crushing defeat. The Chinese landed only 16 significant strikes and absorbed 74 shots in 3 rounds. Moreover, he delivered just 25% of strikes. Santiago took on Neal in 2018 and knocked him out in the fourth heat after 3 rounds of domination. Magny has certainly improved his game since 2018; however, the results of those contests speak for themselves.

Considering all these factors, Ponzinibbio has a great chance to defeat Jingliang. Santiago’s finish rate is 74%, but Li has been stopped only once in 2015 (by submission). The Leech has a great ability to absorb strikes, and Gente Boa’s grappling expertise might not be enough to make Li tap. Therefore, Santiago will likely beat Jingliang via decision.