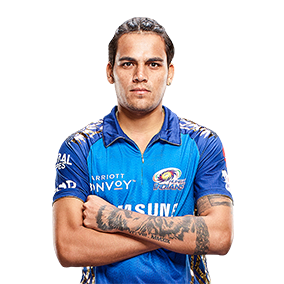 Transfer Career: Rising Pune Supergiant bought Rahul Chahar for 10 Lakhs in 2017 IPL Season. In 2018, Mumbai Indians bought him and he is still in their ranks.

Biography: Rahul Chahar is a 21-year old leg break bowler who made his first-class debut for Rajasthan in the 2017 Ranji Trophy. He got his IPL start at Rising Pune Supergiant in 2017 before being bought by Mumbai Indians where he still plays. He made his debut for Indian T20 side in August 2019 when he played his only game against West Indies. The youngster has loads of potential and we hope to see more of him at the domestic, IPL, and International stage soon.