Are you going to #PannuPind? 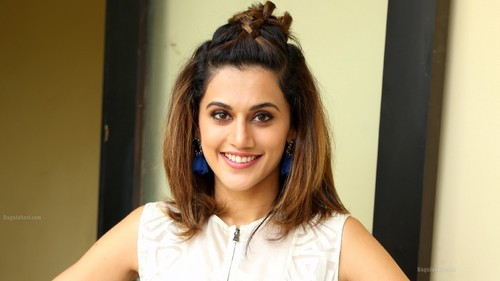 This good news came in today as Tapsee Pannu posted a picture of her newly renovated apartment on Instagram this Thursday. With a good lineup of films in 2021, the actress gave glimpse to her fans inside the redecorated apartment with two photographs. In the first one she was lying down on a couch with a touch of old school furniture & wood work for her wall hingin television which was a new technology by One+.. The second photograph was of a landline telephone with her television covered with a red & white pattern of curtains. She called it “Chota Parda”.

She clearly mentioned that the interior designing was done by her sister Shagun Pannu & gave her credits for the same. The post started to draw the attention of her family, friends & celebrities from the B town.

“Please also keep the pannu travel bus ready for pick up. Shakti Nagar to and fro,”

“I can’t hide anything”.

She also mentioned that a similar kind of incident happened in 2013 & appreciated the Finance Minister’s tweet that it was just a procedure.

We hope that her house warming goes well & the IT department is not a part of it.