U Mumba vs Puneri Paltan: Preview and Prediction 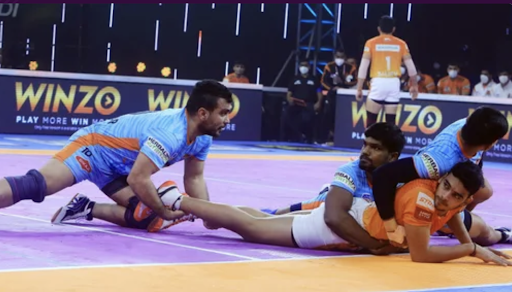 It’s time for the Maharashtra derby as the season 2 champions U Mumba lock horns with the Puneri Paltan in the 52nd match of the Pro Kabaddi League Season 8 at the Sheraton Grand Convention Centre in Bengaluru on Friday.

U Mumba has been one of the most dominant units with the raiding duo of Abhishek Singh and V Ajith Kumar and the defenders have been stellar with Fazel Atrachali leading the pack.

Puneri Paltan has been lethal after Nitin Tomar’s comeback and Aslam Inamdar and Mohit Goyat have been exquisite with their raiding this season. If all the players are fit the franchise has a perfect blend of youth and experience in their squad as well as the starting 7.

U Mumba is ranked 5th on the points table with 3 wins and as many ties in 8 matches this season. Their only loss in the last 5 matches came in the previous match against the Patna Pirates. Both the departments were comprehensively dominated by the 3-time champions.

Puneri Paltan is placed in the bottom half of the table with 3 wins and 5 losses. However, they have been improving off late with 2 of their wins coming in the last three matches. They got the better of defending champions Bengal Warriors in the previous match and will be looking to build on the momentum.

U Mumba has won 9 matches in the 16 meetings so far between the two franchises. Puneri Paltan has been victorious in 5 of them while two matches have ended in a tie. U Mumba won the first match convincingly with a 33-23 win over the Pune-based franchise while the second match ended in a 23-23 tie. Fazel Atrachali: The U Mumba skipper hasn’t been among the points this season however, his influence as a leader has been telling. He has been a great support to Mohsen Maghsdoudlou and Rinku Hari. However, he was off the mat for a longer duration of time against Patna and that hurt the franchise. His presence on the mat will be the key factor against the Puneri Paltan.

Aslam Inamdar: The right corner has been one of the best all-rounders in this season with 50 raid points and 12 tackle points. The youngster has been impressive in his first season of PKL and will be posing a tough challenge to Abhishek Singh and V Ajith Kumar in the upcoming match.

U Mumba lost their previous match but if V Ajith Kumar comes back into the squad, the team will hold an advantage against the Puneri Paltan. The Pune-based franchise is coming into its own and but will be the underdogs.