U Mumba vs Jaipur Pink Panthers: Preview and Prediction  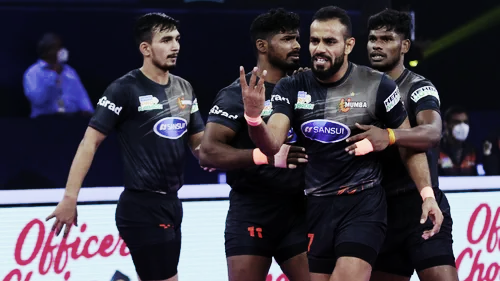 Will the MumBoys be able to complete a double against arch-rivals in Season 8?

Champions of the first two editions of Pro Kabaddi League, Jaipur Pink Panthers, and U Mumba are set for the ‘El Clasico’ in Match 119 of PKL Season 8.

These two western franchisees were recognized as the hubs in the initial stages of this league as they shared a terrific rivalry between them. The intensity of the encounter will be sky-high as Jaipur coach Sanjeev Kumar Baliyan and the season’s most successful raider Arjun Deshwal was part of Mumba in the previous edition while former Pink Panther Sunil Siddhagawli will be seen on the Orange side.

U Mumba claimed all match-points in their previous face-off with western counterparts as the action ended on a 37-28 scoreline. Exceptional Super 10s by the Raiding duo of Abhishek and Ajith and captain Fazel Atrachali’s three crucial tackle points played a pivotal role in the Mumba triumph. While Arjun Deshwal’s performance of 14 raid points was half of the team’s tally of 28 total points.

Mumba coach Subramanian Rajaguru may give a start to the sturdy right-cover defender Siddhagawli ahead of Rahul Sethpal as he couldn’t score even a single point in the Haryana Steelers defeat. It’s surprising from Pink Panthers as the gaffer is trying every raiding option from the roster ahead of established all-rounder Nitin Rawal who is capable of winning games on his own.

U Mumba and Jaipur Pink Panthers are mid-table combatants fighting for sliding into the playoffs round but things are getting tougher as both of them list their previous fixtures. The Maharashtrian outfit was thrashed by Haryana Steelers while Jaipur failed to grab one consolation match-point after losing out by the difference of eight.

It’s a virtual knockout encounter where one team can sideline their opponents from the playoffs qualification race. Both teams have played 19 matches in Season 8 so far, Mumbai is standing in the seventh position with 53 points while Jaipur has scored just one point less than the counterparts.

After a convincing victory in their previous face-off, Mumba crossed the double-digit number of wins (10) in the head-to-head count. While the Rajasthan-based franchise has six victories over the arch-rivals and the 18 head-to-head battles also consisted of two resultless fixtures. 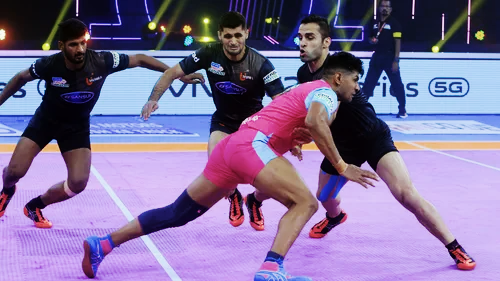 Fazel Atrachali: The Iranian Sultan delivered an individual performance against Bengal Warriors which will be remembered for a long time by the PKL universe. Fazel dethroned the Royal Bengal attack by scoring a whopping eight tackle points from ten attempts in a ten-point victory over the defending champions.

Although the finest defensive display was followed by a disastrous outing against Haryana Steelers, the raiding department of Jaipur will surely be cautious from the havoc of Mumba left-corner.

Arjun Deshwal: Day by day the Services spearhead is making the headlines with his raiding prowess and magnificent consistency. Arjun was the top scorer of the match with 16 raid points but couldn’t thrive Pink Panthers against Bengaluru Bulls in his previous game.

Deshwal hasn’t missed a single game this season so far scoring 210 raid points and 12 Super 10s with an average of 11.05 raid points.

It’s quite hard to predict a winner from this encounter as both combatants are standing on equal chances of winning the contest. Despite losing their recent match, U Mumba fetched ten match-points from the previous three fixtures with great intent on the mat and it will grant a little advantage to the MumBoys.