The U Mumba clashed against the table-toppers in Bengaluru Bulls in the 78th match of the Pro Kabaddi League Season 8 here at Sheraton Grand, Whitefield in Bengaluru. Both the sides have been decent this season, but it was U Mumba who the match 45-34, and finished two for two this season against their opponents tonight.

Pawan Kumar Sehrawat will be distraught tonight as the Bulls skipper failed to lead his side over the finish line against the Mumbai-based franchise. Pawan was stellar tonight as the star raider racked up fourteen points in the game, but was unable to finish the game with a victory at the call of the final whistle.

Abhisekh Singh was stunning from the start as Mumbai’s strike raider was all over the opposition from the get-go. The raider picked up the first point of the match in his first raid as he caught Sourabh Nandal off-guard with a running hand touch. Pawan tried to fire back for his side but was hunted down by Fazal Atrachali, as the Iranian skipper initiated a terrific back hold, holding the raider locked to the mat.

U Mumba rode on the early momentum and inflicted the first all-out of the game within the first five minutes of the contest increasing their lead to six points with 15 minutes remaining in the first half. Pawan however did not shy away from the challenge as the raider picked up a Super Raid in the very next moment to reduce the point margin to three points. The Bulls equalized in the 10th minute of the game with a great chain tackle on Abhisekh Singh evening the odds.

U Mumba saved an all-out for their camp in the 12th minute of the game as V Ajith Kumar scored a touchpoint for his time, producing a much-needed renewal. U Mumba was quick with their plans as they quickly subbed in another defender in Rahul Sethal alongside recently revived Fazal as the duo scored a super tackle on Pawan Sehrawat. 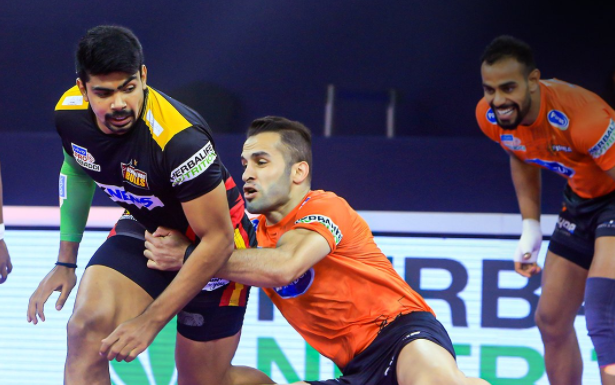 Both sides were however brought to a stalemate as the South Indian side returned the favor in the 14th minute of the first half to give U Mumba their first all-out of the games, bringing the scores to 18 points each. Pawan completed his 12th Super 10 of the season in the 18th minute of the half with a great hand touch on the covers.

Both the sides ended the first half with the U Mumba leading the game with a two-point margin over their opponents. The second half started off slow but the Mumbai-based franchise quickly picked off the pace to put an end to Pawan’s reign with the defense keeping him sidelined for the majority of the second half.

Mumba used the momentum from the tackle point as they inflicted the second all-out upon their opponent’s early in the second half to increase their lead to six points just four minutes into the half. The South Indian side failed to make any comeback in the game after the point as their strike raider was pinned down at every opportunity.

U Mumba will be very happy with their win tonight as they are now at the fourth position at the points table with 41 points against their name in 13 appearances. The team has a two-game advantage over the Bulls who have 46 points in 15 games and are currently at the top of the table.

On the other hand, the Bulls will be a part of the South Indian derby on Sunday as they face the Tamil Thalaivas in their 16th fixture of the tournament. The team needs a couple of wins in their upcoming games if they wish to secure a spot in the playoff, with just seven fixtures in hand.