Jaipur Pink Panthers faced Telugu Titans in the second game of the night in Pro Kabaddi League season 8 on Wednesday here at Bengaluru. It was a game of constant ups and downs between both the teams with just a point separating the two in the end.

The game was evenly contested till the first seven minutes with the score tied at 4-4. Deepak Hooda then gave the Jaipur-based team a two-point raid that helped them take the lead. Arjun Deshwal also scored points along with Sandeep Dhull and Amit Khar scoring in the defense, due to which they were able to dominate. Vishal pinned Rakesh down in the 15th minute as Jaipur inflicted the first all-out of the game. With a strong raiding and defensive display, they took an eight-point lead at the end of the first half with a score of 13-21.

Rajnish started the second half with a touchpoint for the Titans. In the 22nd minute, Adarsh wiped three men out to return the all-out as the Hyderabad-based franchise made a comeback to level the score 20-20. The Jaipur-based club then recovered as they started to take their lead back and maintain it as well. With Arjun bringing more points, they led by four points again in the 27th minute of the game.

Surinder then effected a super tackle to help the Titans cut the lead down. The pendulum shifted again as the scores were leveled again on 25-25 in the 31st minute but Arjun struck a super raid to complete his super ten and give Jaipur a three-point lead in the very next minute. The momentum kept swinging with Rajnish, Raju, and Adarsh bringing points as the Hyderabad-based team once again leveled scores 28-28 with four minutes on the clock. 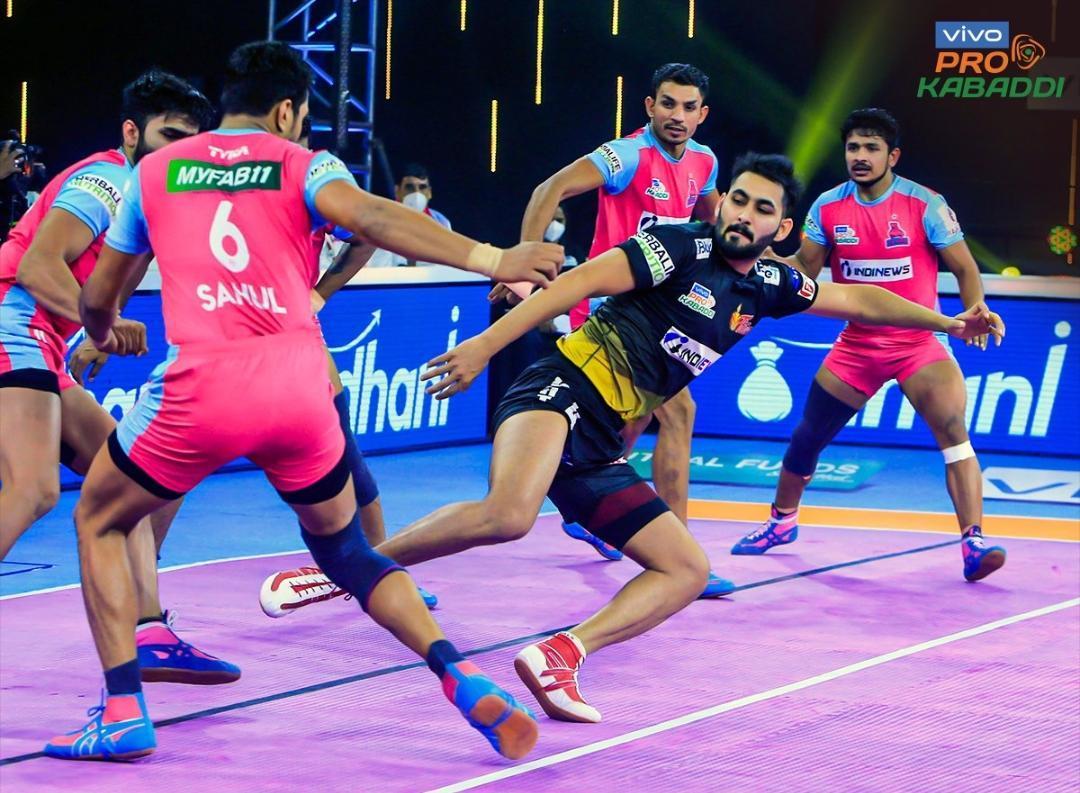 The Panthers were down to two men with under three minutes to play but Deepak helped them avoid the all-out. With just a minute to go, the scores were on par once again, reading 31-31. However, Deepak was tackled as the Jaipur-based franchise conceded the all-out to give the Titans a lead at a crucial juncture in the match. They managed to hold on to it and eventually win the game with a difference of just a solitary point.

Arjun scored a super ten for Jaipur and was their best raider with thirteen points in the entire match. Deepak put up an all-round show for them with four raids and as many tackle points. Vishal was also their best defender along with Deepak, scoring four tackle points. Amit, Sandeep, and Shaul Kumar picked up two tackle points each. Adarsh scored nine raid points for the Titans, while Rajnish scored seven.

With five wins, as many losses, and a tie, Jaipur holds on to their fifth spot with 32 points from eleven matches. Whereas the Telugu Titans remain on the last spot despite picking up their first win. They also have registered eight defeats and two ties with 17 points to their name.

The race for the top six gets tighter and the Panthers will look for a win when they face Tamil Thalaivas on Saturday. The Titans will meet U Mumba in Saturday’s triple-header as well in their next encounter and will hope that they can build a winning run from here on.