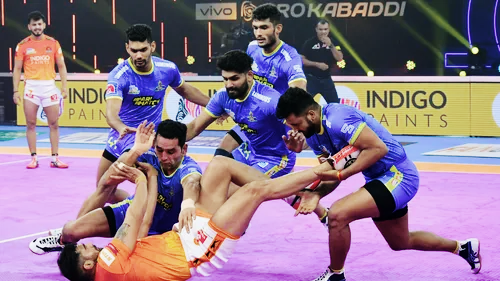 The defensive fortress of Tamil Thalaivas is ready to take on the marching storm of Puneri Paltan in Match 121 of the caravan. Pro Kabaddi eighth edition’s solitary venue Sheraton Grand Whitefield Hotel will be hosting this high-voltage contest between Nitin Tomar’s Paltan and Surjeet-led Thalaivas.

The Pro Kabaddi universe is charged up for the forthcoming battle between the outrageous offensive unit of Puneri Paltan and Tamil Thalaivas’ credible defense line. Experienced UP boys Rahul Chaudhari and Nitin Tomar are providing assistance to the fiery raiders Aslam Inamdar and Mohit Goyat. Meanwhile, Thalaivas’ defensive department is headed by legendary cover defender Surjeet who donned captain’s responsibility for Anup’s Paltan in the seventh season.

In their previous face-off, the final whistle was blown on a scoreline of 36-26 in favor of the Chennai-based franchise where Pune did score more tackle points than the counterpart but was outplayed by Thalaivas in other departments. The limelight in that battle between Chennai and Pune was stolen by two Mumbaikars as Ajinkya Pawar came up with a marvelous Super 10 while Pankaj Mohite scored eight raid points in a losing cause.

Ajinkya was given rest by coach J Udayakumar and was excluded from the matchday squad against Dabang Delhi KC. His absence cost Thalaivas big time as the Tamil attack was slandered by the defense line of the Capital-based franchise and could score only 17 raid points in the whole 40 minutes of action. Hence the 24-year-old Maharashtrian raider will be back in the lineup to accommodate the other raiders Manjeet and Himanshu.

It’s a Do-or-Die game for both franchises to keep themselves alive in the playoffs qualification saga. Especially for the Tamil Thalaivas side as even a single point drop from this fixture means their chances to make it through to the next round are almost over. And they will be turning up for this encounter after losing four straight games previously.

On the other hand, we saw a miraculous turnaround of Puneri Paltan as they dreadfully kick-started the campaign but bounced back midway through Season 8. Don’t be surprised if this storming Puneri Paltan roster thrives its way to the playoffs under the watch of mastermind Anup Kumar.

Pune and Chennai have faced each other just five times at the grand stage of the Pro Kabaddi League. Pune won the one-sided contest in solitary face-off from the fifth edition where they encountered each other for the first time and the Thalaivas gave it back to the Paltan in the following season. Both encounters between these two franchises from the seventh season ended in ties while the blue side got the edge earlier this season. 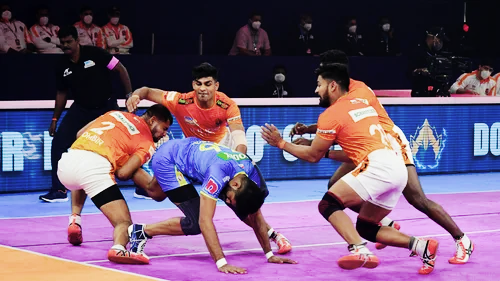 Sturdy Sombir Gulia is the player to watch out for

Sombir Gulia: The stalwart right-corner defender is in the form of his life since edging down Baldev Singh to make it to the Starting 7 of Puneri Paltan. Sombir scored back-to-back High 5s before turning up for the Gujarat game and scored 13 tackle points with a strike rate of 81.25% in those two games. He has formed a deadly duo with vice-captain Vishal Bharadwaj as both Pune’s both corners registered High 5s and contributed 12 tackle points in a 20-point victory over the Titans.

Manjeet Dahiya: The Services raider has done commendable work by carrying the scoring responsibilities of Thalaivas throughout Season 8. His contribution of ten raid points played a pivotal role as they were able to put up a tough fight against Dabang Delhi in a thrilling contest. Although Manjeet acted as a lone warrior in that game, Ajinkya’s comeback may release the unnecessary pressure from his young shoulders.

Winning odds are favoring the Pune franchise as the Paltan has been one of the most dangerous PKL sides recently. While Tamil Thalaivas are demotivated due to their losing run from the previous four fixtures and the Surjeet-led roster will be looking forward to breaking this streak in order to achieve the first playoffs qualification in the history of their franchise.