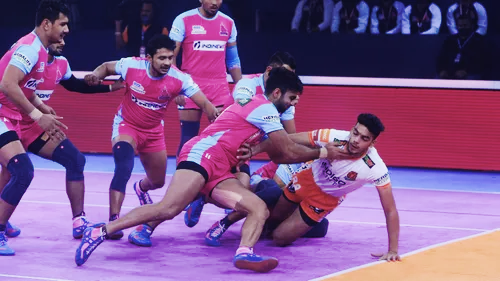 Two Kabaddi giants from the western land of India are ready to take on each other in match number 97 of the Pro Kabaddi League Season 8. Bengaluru’s Sheraton Grand Whitefield Hotel will be hosting this electrifying clash where the Yuva faculty of Puneri Paltan will be summoned by the inaugural champions Jaipur Pink Panthers.

Rajasthan and Maharashtra are those states who are enriched with the history and heritage of this game especially Jaipur and Pune are considered as the hubs of Kabaddi in their respective regions. Puneri Paltan coach Anup Kumar was welcomed by the arch-rivals Jaipur Pink Panthers when the legendary raider bowed out of U Mumba ahead of season six. While Jaipur’s two most experienced players, Deepak Niwas Hooda and Dharmaraj Cheralathan had been part of the Paltan at a time.

In the previous face-off between these two heavyweights, Jaipur registered a five-point convincing win over the Maharashtrian outfit. A marvellous ‘Super 10’ from the raiding sensation Arjun Deshwal and robust display from the corner duo of Sandeep Dhull and Sahul Kumar outclassed the Pune side that day. Meanwhile, Pune’s only positive from that encounter was all-rounder Aslam Inamdar who scored 3 raid points and 3 tackle points as well.

We may see an unchanged Starting 7 of both sides in this clash as both coaches are likely to retain the winning combination. The substitute bench will be filled with the star power of Nitin Rawal, Dharmaraj Cheralathan, Naveen Bazzad, Vishal Bharadwaj, etc. players who are capable of making a game-changing cameo appearance.

The PKL universe is witnessing an incredible turnaround of Puneri Paltan’s season eight campaign lately. The Paltan was hitting rock bottom of the points table once and now cruising on a four-match winning run having won six of their last eight fixtures. The guidance of Anup Kumar, the captaincy of Nitin Tomar, and the fearless approach from the youngsters played a pivotal role in this comeback.

The Rajasthan-based franchise is known as giant-killers as having crushed every top side of season eight so far. The confidence of Pink Panthers will be sky-high after a one-sided victory over Patna Pirates followed by a rocking outcome against table-toppers Dabang Delhi. Jaipur coach Sanjeev Baliyan seems with no worries as the Pink Panthers lineup is filled with all in-form players.

The Pink City emerged victorious over the cultural capital of Maharashtra in the last four encounters between them. A 31-26 scoreline in favour of Jaipur Pink Panthers brought their head-to-head count on a double-digit against Puneri Paltan. The inaugural champions have ten victories over the western counterparts while Pune has only half the number of wins compared to Pink Panthers. 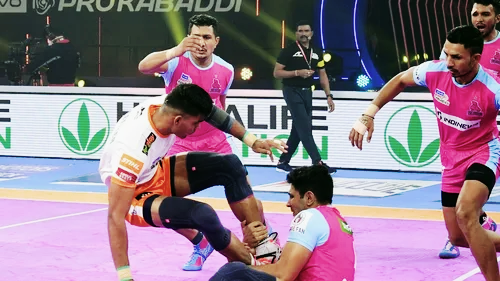 Aslam Inamdar: The Yuva Paltan product is one of the prime contenders for the young player of the season award. Not just with his acrobatic raiding skills but the all-rounder also contributes with gutsy tackles on opponents when his coach and captain asks him to do it. Aslam has a golden chance to enter into the Top 10 list of highest raid points scorers as the talisman is standing in the eleventh position with 104 raid points from 15 appearances of the debut season.

Sandeep Dhull: The Jaipur captain is leading the inaugural champions with an example and has changed the fortunes of Pink Panthers since his captaincy takeover. The left corner defender was also the best defender of the match with four tackle points from six attempts when he faced the Pune attack earlier this season. Even in the previous fixture, Sandeep was the joint-highest scoring defender of the match along with his corner partner Sahul.

A crucial match for both sides as both of them are in contention for the playoffs qualification. Jaipur will be eying on five match-points from this fixture to go one step closer to the Top 3 but it won’t be easy for them to break Pune’s four-match winning streak.