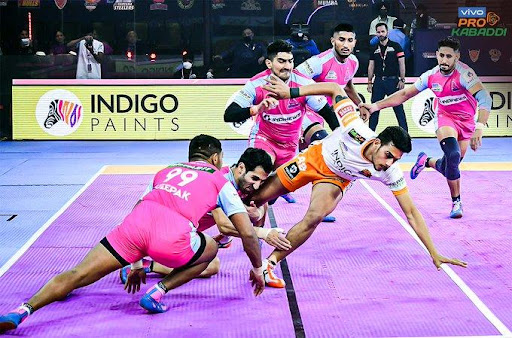 Puneri Paltan would have ideally wanted a victory with a margin of at least 28 points over the Jaipur Pink Panthers. That would have confirmed their spot in the playoffs in the eighth edition of the Pro Kabaddi League.

However, that proved too much to execute, with Arjun Deshwal continuing his good run in this tournament for the Pink Panthers. So, the Paltan had to settle for a simpler, more achievable 37-30 victory.

The match started on a good note for the Paltan as Jaipur’s key player, Deepak Niwas Hooda, was out of the contest. In his absence, Arjun Deshwal had to carry an even greater load on his shoulders. Unfortunately, he didn’t receive any support from other raiders.

The two halves of the match contrasted greatly with each other. The first half was entirely about defense as both teams struggled to mount successful raids. It became a contest between two very competent defensive units.

The second half witnessed the raiders coming into full flow and touchpoints started coming through in a torrent. On the other hand, Deshwal was a threat to Pune while both Mohit Goyat and Aslam Inamdar were causing troubles to Jaipur and this proved to be the difference in the match.

The game started with Jaipur tackling both Aslam and Mohit and sending them to the bench. The tables turned soon as Pune’s defense started imposing themselves in the game.

Vishal Bharadwaj, Sombir, and Mohit changed the course of the match. Arjun was eliminated early on and, in his absence, Jaipur went downhill and succumbed to an all-out in the 16th minute. The score read 12-8.

After the all-out, Pune once again neutralized Deshwal with a brilliant tackle by Bharadwaj. Following that, the Pink Panthers went into a free-fall and were down to just one man at the end of the first half. The score was 18-11 in favor of the Pune-based team. As expected, the second all-out for Jaipur came immediately after the restart and the lead grew to 21-11 for Paltan.

Thankfully for the Jaipur side, after the second all-out, Deshwal came into his own and started displaying his raiding prowess. Unfortunately, Aslam Inamdar and Mohit Goyat were able to provide a more-than-adequate counterweight to this.

Aslam pulled off a brilliant 3-point super raid early in the second half. Arjun immediately responded with a 2-point raid of his own. The running hand touch of Deshwal was causing problems for the Pune defense and the Jaipur raider completed his ‘Super 10’ in the seventh minute of the second half. 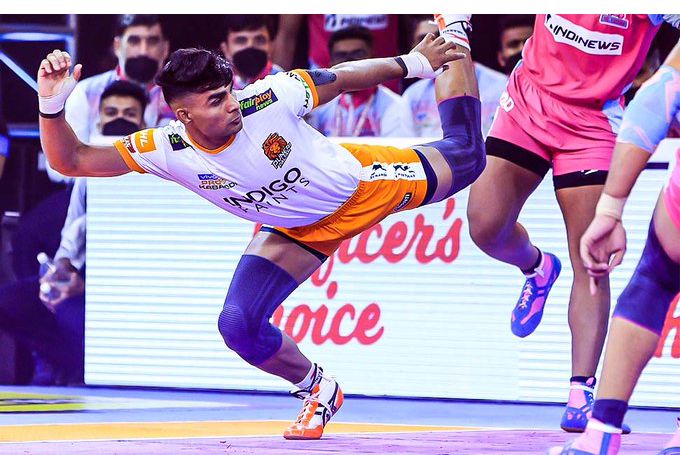 Aslam’s Super-10 was completed in the 31st minute and the game was still very much in favor of Pune. However, the prospect of a massive win by a margin of 28 points, which seemed possible after the second all-out of Jaipur, dissipated due to Arjun’s form.

In fact, Pune was down to three men at one stage but a super tackle on Deshwal increased their lead to 11 points with the score standing at 33-22.

However, the Pink Panthers were able to revive Arjun and he pulled off a two-point raid to have the Paltan reduced to just two men on the mat. As expected, the first all-out for Puneri Paltan was inflicted on them with just over three minutes remaining while the scoreboard now read 34-29. Suddenly, a comeback by Jaipur was on the cards.

Paltan ensured that there were no slip-ups and Mohit Goyat completed his High-5 with the crucial tackle of Deshwal. This sealed the deal for Pune and they completed the formalities to win 37-30.

Mohit racked up nine raid points to go along with his High-5 to produce a spectacular all-round performance. Aslam Inamdar’s 11 points also played a crucial role. Arjun Deshwal scored 18 points but with the next best raider in his team – Naveen – scoring just two points, he was left high and dry.