The champions of the inaugural season, the Jaipur Pink Panthers, will play against the Gujarat Giants on Saturday. Both the teams will be playing on consecutive days, which means there might be a possibility that the franchise will make a couple of changes in order to give rest to their players. Coach Ram Mehar Singh’s Gujarat Giants have a lot to prove this time. On the other hand, Men in Pink, too, would opt for the same idea by giving a break to their leading players.

Dabang Delhi is on cloud nine after their nail-biting victory against UP Yoddha on Wednesday. They would be high on confidence in their battle against the Telugu Titans. The dugout of the Titans must be pleased as well because of their sensational victory against the Patna Pirates. This was their first victory of the season. So, the battle between two winning teams could make your Saturday a splendid one.

So far, it doesn’t seem that the Patna Pirates are the three-time champions of this esteemed league. The way they have played the tournament so far has been quite ordinary. The Bihar-based franchise lost their previous encounter against the Telugu Titans, which could have been their game easily. The Bengal Warriors, on the other hand, are coming off a victory over the Bengaluru Bulls in their most recent match. They beat Vikash Khandola & Co. by a margin of nine points.

Let us take a glance at the preview and prediction of each game to be played on October 15:

Both franchises are going to have a hectic Saturday because of their consecutive matches. They both have their games on October 14, and there is hardly any possibility of any match practice. The situation is even tougher for the Gujarat Giants as they will play the last match on October 14 and then once again take the field for the first match on October 15.

With players like Rakesh, Chandran Ranjit and Prateek Dhaiya expected to take the field on October 14, one or two of these might take a rest from the game against the Panthers in order to be match-ready for the next encounter. It also depends on the result of the clash against Puneri Paltan on Friday.

The Jaipur Pink Panthers last played on October 9 and will be looking to win both of their upcoming matches against the Haryana Steelers and the Gujarat Giants on October 14 and 15, respectively. They too have games on successive days, but the Men in Pink must have got enough match practice in their four-day gap.

Talking about their head-to-head battles to date, they have faced each other six times, with the Gujarat Giants winning three of them. The Panthers got away with a win on two occasions. For the 15th October encounter, all eyes will be on JPP’s Arjun Deshwal while Rakesh will be the one to look at for the Giants. The Panthers would have momentum in this game.

Telugu Titans have now moved to the seventh spot after their victory against Patna Pirates, while Dabang Delhi’s stupendous form continues with a magnificent win over UP Yoddha in a nail-biter. Naveen Kumar, once again, was the showstopper against the Yoddha with 13 raid points. Moreover, Manjeet too scored 11 raid points for his side.

From Telugu Titans, Monu Goyat impressed his fans after scoring a Super 10 against the Pirates. Another star raider, Siddharth Desai, steadily brought back his lost form as he scored 7 raid points. Both these players will be in focus during their major clash against Dabang Delhi.

Telugu Titans and Dabang Delhi have played 14 games to date and, surprisingly, the Titans have ruled this battle with 8 victories. Delhi, on the other hand, won just 5 games while 1 match ended in a draw. Looking at the paper, Dabang Delhi looks stronger as compared to Telugu Titans. They are the favorites to win this encounter. 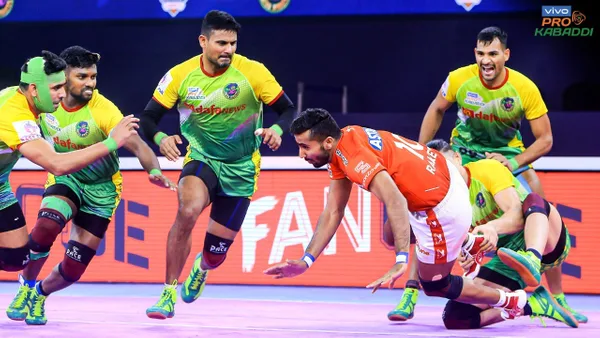 Bengal Warriors are sitting at the second spot with two victories out of three. Their last win, against Bengaluru Bulls stunned everyone. Captain Maninder Singh scored a Super 10, which is great for the franchise for the upcoming games. However, Deepak Hooda’s poor patch is a matter of concern for the Warriors.

A team like Patna Pirates are at the bottom with Gujarat Giants. The three-time champions lost their previous battle against Telugu Titans, which could have gone their way easily. Patna’s defense was not up to the mark, with Neeraj Kumar going pointless in the clash. Sajin C, too, couldn’t earn any points for his team.

The head-to-head count will make you go crazy as the Patna Pirates have won 12 games against the West Bengal-based franchise while Bengal has won only four. Three games culminated in ties. Keeping in mind the current form, the Bengal Warriors are clear favourites to win this match. The game could be crucial for Deepak Hooda if he has to be in the starting seven.