The teacher-student duo of Pardeep and Ram Mehar was unstoppable together!

As the wagon of the Pro Kabaddi League Season 9 is advancing steadily, the intensity of the Kabaddi action is also touching new heights game by game. The Matchday 12 of the PKL 9 caravan brings up another doubleheader clash that will take place at Shree Kanteerava Indoor Stadium on Wednesday from 7:30 PM onwards.

The matchday action will begin with the battle of heavyweights where Ram Mehar Singh of Gujarat Giants will be knitting the trap against his former disciple Pardeep Narwal and his side UP Yoddhas.

Receiving the roaring applause of the home crowd, Bengaluru Bulls will be gracing the battlefield to summon the neighbourhood rivals Tamil Thalaivas in the second game of the day.

Match 28: Gujarat Giants vs UP Yoddhas 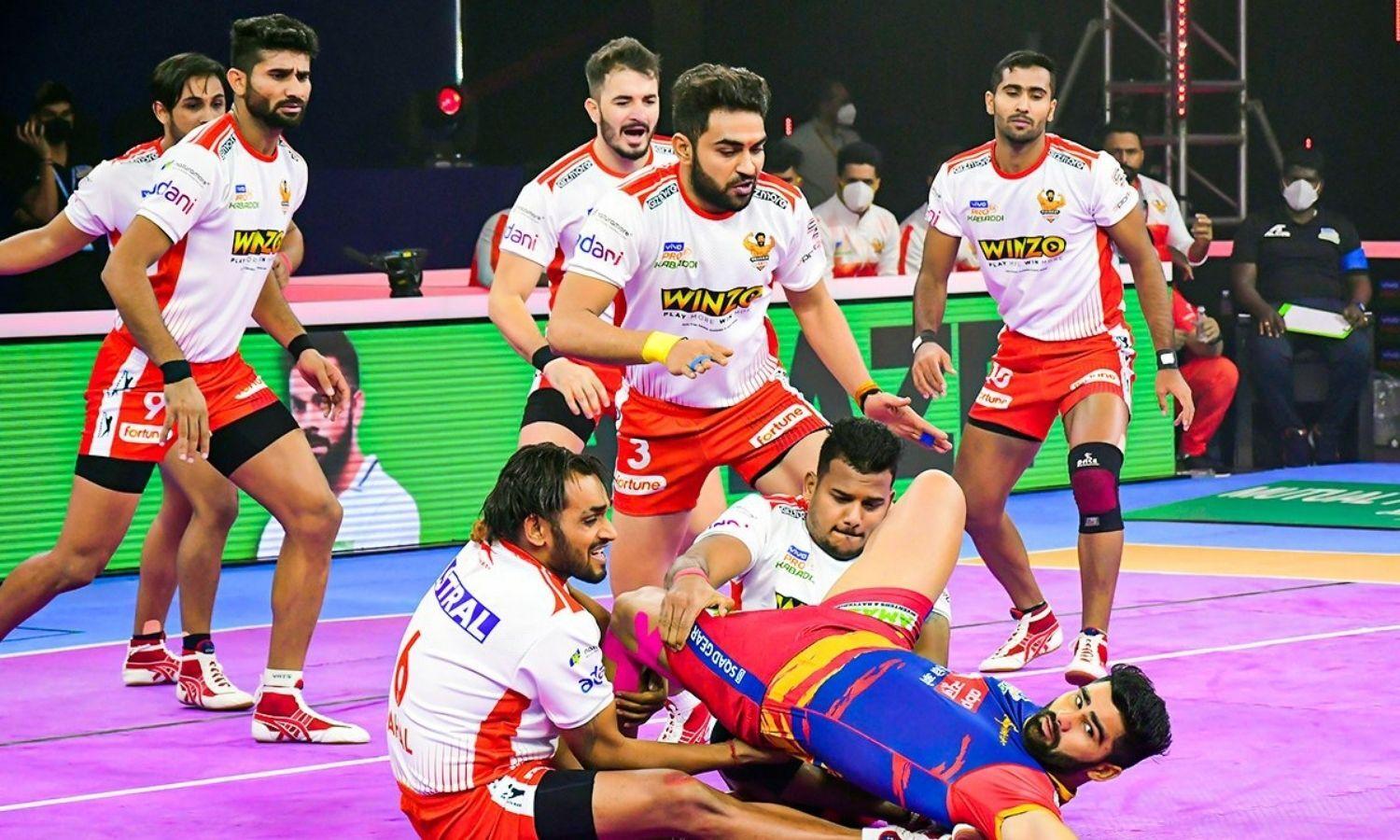 The Yoddhas from the land of Uttar Pradesh crushed the home side Bengaluru Bulls to register a thumping victory in the high-scoring saga. The record-breaker Pardeep Narwal achieved the ninth edition’s first Super 10 while his raiding partner Surender Gill also claimed 14 raid points. Meanwhile, Gujarat suffered a heart-wrenching fate against Jaipur Pink Panthers in their previous fixture where they could score only 18 points throughout the 40 minutes of play.

The one-on-one battle which each Pro Kabaddi viewer is looking forward to in this clash is the face-off between Yoddha raider Narwal and Giants’ right-corner defender Shankar Gadai.

The Maharashtrian captain Shankar stunned the Kabaddi universe twice when he successfully attempted an advance back-hold over the record-breaker in Senior Nationals and National Games as well. Pardeep has regained his form with a marvellous Super 10 while Gadai also fetched three tackle points against Jaipur in a low-scoring encounter.

The head-to-head count of this rivalry between two of the latest entrants in the PKL roster heavily favours the Giants in Red outfits to date. Gujarat has four wins over the Northerners while UP has managed to emerge victorious only on a single occasion and two encounters have consummated on an equivalent scoreline.

In the auction round, Gujarat almost acquired the services of Pardeep Narwal before he was purchased by the Yoddhas through an FBM card. The Pro Kabaddi’s most successful raider was also eager to reunite with Ram Mehar Singh at Giants camp however, destiny had different plans for the Haryana-born raider.

The decision of starting Durgesh Netam ahead of Rohit Tomar and Rathan Gowda as the third raider was the surprising one from coach Jasveer Singh. However, the Chhattisgarh-based youngster got only a single raiding opportunity before getting subbed off at half-time as the wrath of Gill and Pardeep was already at the peak.

It’s the fifth fixture for the Giants and they are still not able to find a perfect raiding combination to accommodate their strike raider Rakesh Sungroya who also suffered a rare failure against Jaipur.

As per the current form and outcome of the recent fixture, the Red and Blues are clear favorites to win this contest however, Jasveer and his boys won’t be taking this opposition lightly. Especially the way Gujarat defeated Puneri Paltan previously, it’s universal that Ram Mehar Singh knows how to trap the big fishes cosily. 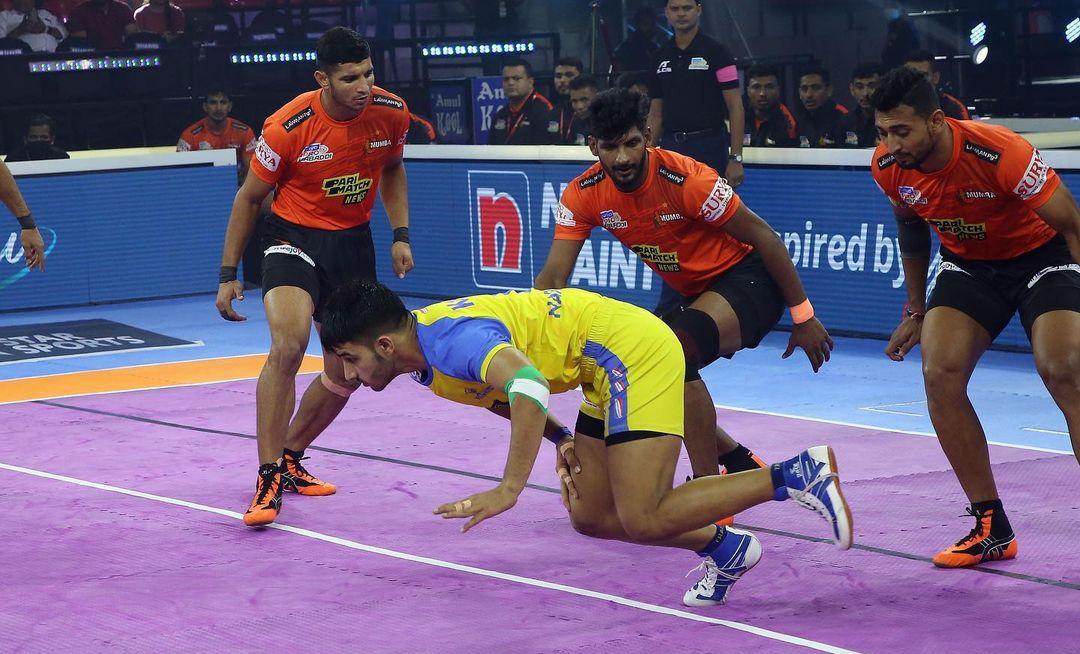 Another star through the NYP ranks of Tamil Thalaivas is born!

The stage is set for another Southern Derby between two neighbourhood rivals who are quarrelling against each other in every discipline under the banner of ‘Kaveri Derby’.

The young Bulls defeated the dark horses Telugu Titans and Puneri Paltan in their first two games but then suffered two consecutive losses post that prowess. A well-prepared Thalaivas unit held Gujarat for a draw in the opening fixture but has failed to replicate the same show again in the following games.

Bengaluru was the home of Pawan Kumar Sehrawat for three seasons before his departure from the Red and Black camp to join the Thalaivas. However, Pawan won’t be able to show his prowess against his former side as the Tamil skipper is still unfit to feature on the PKL battlefield. An ankle injury in the first half of the opening game has ruled out Pawan from the major part of the Season 9 campaign and his presence on the mat will be dearly missed by the home crowd.

The head-to-head advantage of this esteemed Kaveri Derby belongs to the Red and Blacks with eight triumphs while arch-rivals only have two wins under their helm. The one-on-one battle of the previous season remained neutral by 1-1 as both teams got the better of each other once in Season 8.

The most recent chapter of this Southern rivalry was dominated by the Yellow and Blues who lashed out their neighbours with a winning margin of 18 points after the heroics of Ajinkya Pawar (10 raid points) and Sagar Rathee (5 tackle points).

Randhir Singh Sehrawat’s decision of including Rajnesh Narwal in the starting lineup backfired as we see Mayur Kadam back in the right-cover position of the Bulls. The leaders of Bengaluru are also not performing up to the mark as the skipper Mahender Singh had a tackle success rate of just 20% while his deputy Saurabh Nandal also could fetch only 2 tackle points against Yoddhas.

The Tamil gaffer J Udayakumara may not consider any changes in his Starting Seven and continue with the local Thoothukudi lad Vishvanath in the lineup. Raider Himanshu Narwal also impressed everyone with his cameo appearance by scoring 3 quick raid points against U Mumba.

Both of the combatants have lost their two games and are searching for ways to get back on the winning track amidst the form crisis. However, the Bulls have showcased their mettle in the initial fixtures and currently are favourites to emerge victorious from this thrilling contest.