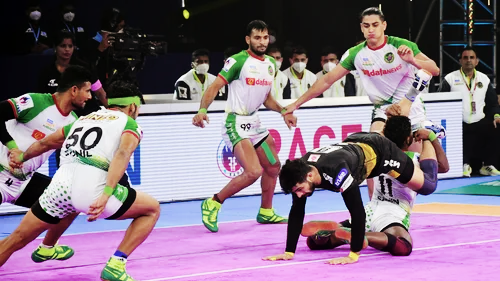 It is an exciting battle between table-toppers and bottom-placed dwellers of the Pro Kabaddi League Season 8 standings at Bengaluru’s Sheraton Grand Whitefield Hotel. Sandeep Kandola’s Telugu Titans will be taking on the in-form Patna Pirates roster led by Prashanth Kumar Rai in Match 116 of the ongoing PKL campaign.

The second encounter between these two sides was supposed to happen on 26th January but it was rescheduled due to a Covid-19 interruption. The two PKL franchises having a parallel Season 8 campaign are up against each other to battle out for the final time in this edition.

Patna edged the Titans in a one-point victory with a scoreline of 31-30 the last time these two faced each other on the PKL battlefield. Youngster Ankit Beniwal with a magical Super 10 and right corner Ruturaj Koravi with four tackle points shined from the Titans camp. While three-time champions Patna Pirates came up with a perfect team effort to outclass the Yellow Brigade in a thrilling contest.

Ram Mehar Singh may exclude the team’s first-choice right corner Sunil Narwal who had fitness concerns previously and give him rest by starting Shubham Shinde. Shubham came on as a substitute in the second half against his former side Puneri Paltan and topped the tackle points tally with a 100% success rate from four attempts. It is a golden chance for Pirates to test their bench strength and keep every player from the roster in touch for the playoffs round.

Two key players, Sandeep Kandola and Rajnish may make a comeback to the Titans Starting 7 as both of them were absent from their previous Match Day squads. While left cover Prince will be expecting a start after delivering a fine cameo performance of three tackle points including an incredible Super Tackle.

Patna Pirates’ season eight journey has been exactly how gaffer Ram Mehar Singh must’ve expected it to be. The Bihar-based franchise is five points clear of the second-placed Dabang Delhi KC and also became the first team to achieve playoffs qualification. They are cruising on a five-match winning streak after thrashing the in-form Puneri Paltan side by 17 points in their previous fixture.

On the other hand, Telugu Titans Season 8 campaign is contrary to the success of Patna Pirates. The Hyderabad-based franchise’s victory over Jaipur Pink Panthers is the first and unfortunately the only victory from this season so far. Jagadeesh Kumble’s Yellow Brigade is officially out of the playoffs race and will turn up for the remaining fixtures keeping Telugu pride on the line.

Unexpectedly, Telugu Titans are leading the head-to-head count against the most decorated franchise in the history of the Pro Kabaddi League with nine wins. Although the previous victory brought Patna closure to the Titans as the Pirates are currently standing on eight wins from 17 encounters. They will be looking forward to this clash to level the head-to-head count against the familiar foes. 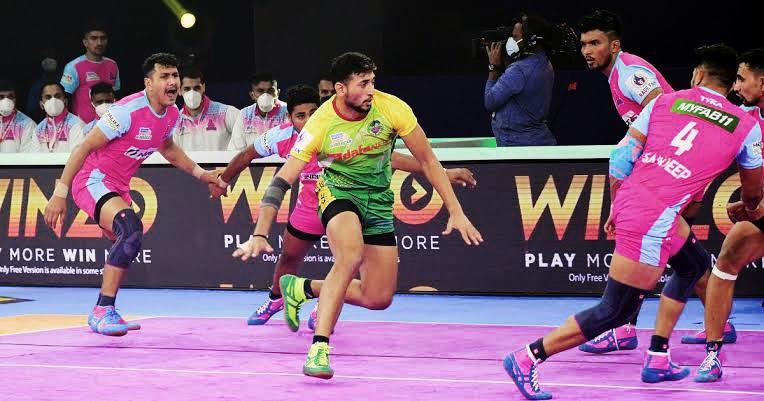 Guman Singh: The youngster kick-started his PKL journey with Jaipur Pink Panthers in the previous season but his current stint with Pirates is turning out to be the breakthrough point. Guman has scored 41 raid points from the last four games with a vigorous 56% raid strike rate and also completed three Super 10s. Patna’s last two fixtures were against both Maharashtrian outfits where Guman delivered Super 10 performances on both occasions, especially a career-best tally of 13 raid points against Puneri Paltan.

Rajnish Dalal: Telugu Titans offensive unit was completely outplayed by Puneri Paltan in the absence of this promising youngster. Rajnish was not featured in the matchday squad of Titans after a great run of three matches where he scored 28 raid points and two Super 10s with a raid strike rate of 65%. Titans will be able to put up a tough fight if Rajnish makes a comeback to accommodate the likes of Ankit Beniwal and Adarsh T in the lineup.

The table-toppers Patna Pirates are undoubtedly the hot favorites to win this contest. While Telugu Titans are standing with low chances to cope from this encounter but it will be very exciting if Pirates opts to test their bench strength against the Hyderabad-based franchise.