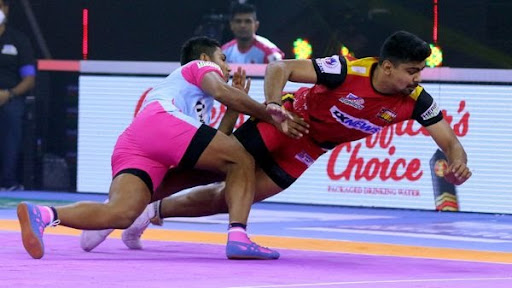 Table-toppers Patna Pirates will lock horns with the season six champions Bengaluru Bulls in Match No.59 of the Pro Kabaddi League Season 8 at the Sheraton Grand Whitefield Hotel and Convention Centre in Bengaluru on Sunday.

The match is bound to be a promising contest as both sides have been in great form so far this season and find themselves at the upper half of the points table so far into the season. The Pirates have been electric this season, after an early defeat at the hands of UP Yoddha early in the season, the team has bounced back well as is on a six-match winning streak, before their game against the Jaipur Pink Panthers.

The Bengaluru Bulls on the other hand have faced their ups and downs so far this season. Despite holding the second spot on the league table, the team at moments looked over-reliant on the skipper, Pawan Kumar Sehrawat to score the bulk of their points. Pawan has 122 points in his nine appearances, and by a heavy margin has been the biggest factor in Bengaluru’s success. Out of 169 successful raids by the Bulls this season, Pawan single-handedly managed 59.76%.

The Pirates had a great start to this season as they picked up a nail-biting 39-42 finish over the Haryana Steelers as Monu Goyat produced an exhilarating performance picking up fifteen points to his name.

However, the UP Yoddha were able to pull off a last-second victory under their feet courtesy of Surinder Gill’s bonus point to end the game on 35-36 at the end of the final whistle.

The Pirates were quick to bounce back after that early setback and have won the last five of their six fixtures against the likes of Bengal Warriors, Puneri Paltan, Telugu Titans, Gujrat Giants, and U Mumba. The team had to settle off with the draw against the Tamil Thalaivas but the team looks high on momentum and could pose a big challenge for the Bulls on Sunday.

The Bengaluru Bulls on the other hand opened their campaign with a big loss at the hands of U Mumba who were all over the Bulls from the start to finish of the whistle. However the Bulls were able to come back strong after the early defeat this season and have won six of their nine fixtures, their second loss came at the hands of UP Yoddha who beat the side 27-42 in a one-sided contest.

The Pirates and Bulls have faced each other in seventeen fixtures over the last seven seasons, while no games ended in no result between the two sides, Patna has won ten of their encounters against the Bulls who won the remaining five games.

Mohammadreza Chiyaneh: The Iranian defender has been fantastic so far this season, playing his first season the defender has already picked up twenty-eight tackles points in eight appearances and stands on number fifth at the best defenders this season. 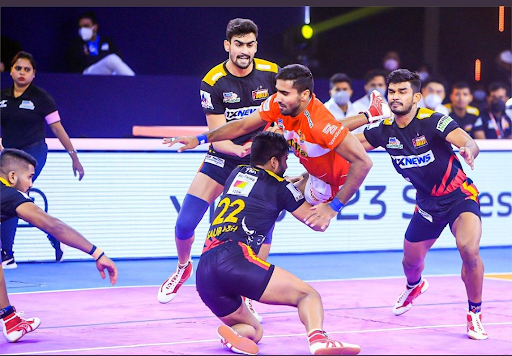 Patna Pirates is a very balanced side with a rock solid-defensive unit that has been working in sync alongside their raiders in Monu Goyat, Prashant Kumar Rai, and Sachin. The Bulls could easily walk away with the game if Sehrawat fires. Hence, we predict a finish in the favour of the Patna Pirates.