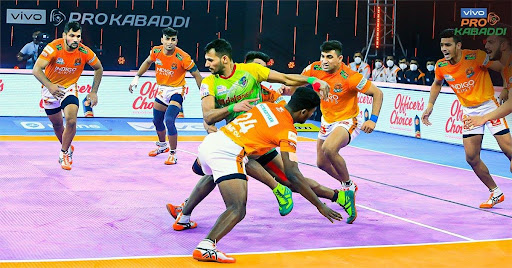 Sachin Tanwar in action as he attempts to reach the midline against Puneri Paltan.

The Patna Pirates were up against the Puneri Paltan in ‘Match 107’ of the Pro Kabaddi League Season 8. The Pirates came into the game with a four-match winning streak to their name and were able to cruise past the Paltan side who seemed helpless against the table-toppers as the Patna-based franchise were able to walk past their opponents 26-43 courtesy of Guman Singh’s 5th Super 10 of the season.

Patna Pirates will be on cloud nine with their win over their opponents tonight as the franchise became the first team to qualify for the playoffs in this edition of the Pro Kabaddi League. The Pirates have been the most consistent league so far in the tournament and have been excellent on both offensive and defensive fronts.

The team now has 70 points to their name in 18 games with 13 wins and will look to finish the group stages on a positive note to consolidate their spot on the top of the table, ensuring a direct entry into the semifinals.

Guman Singh stole the limelight with his stunning performance as the raider has been stunning for the team in absence of regular strike raider Monu Goyat. Guman picked up his fifth Super 10 of the season racking up thirteen points for the Pirates. He was supported by Sachin Tawar who took the supportive role tonight and had six points to his name.

On the other hand, the Pune-based franchise looked extremely dependent on the star all-rounder Aslam Inamdar who had an electric start to the game in the first half but spend the majority of the second half at the sidelines waiting for his revival. Other than Aslam who had nine points to his name, Nitin Tomar and Mohit Goyat were the only two players who were able to withstand the Pirates as the duo picked up a total of ten points for their side. 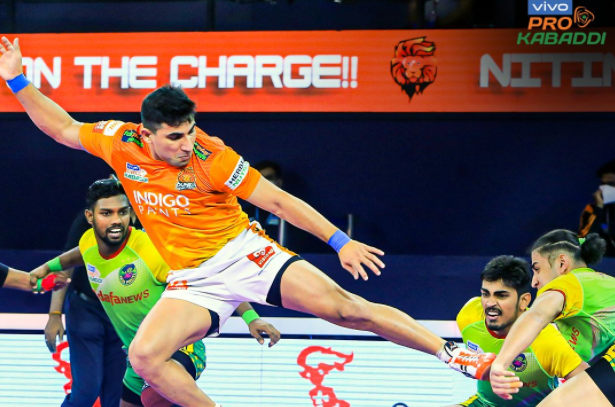 The game started off quick as the Puneri Paltan established the early lead in the game courtesy of Aslam who moved like a live wire on the mat. Patna’s defenders had a tough time getting used to the defender as Aslam picked up consecutive points for his side to put them in the driving seat in the competition.

Patna however bounced back strong in the remaining ten minutes of the first half as Sachin and Guman took it upon themselves to ensure that their team could make a comeback into the contest.

The duo started to pick off defenders one after the other and put the Pune-based franchise in a precarious position in the closing minutes of the first half. As the half progressed the Pirates were back in their usual colors, as the defense took an aggressive approach on the raiders and made sure to turn the man advantage into the all-out just before the end of the first half.

The closing moments of the first half were the most action-packed moments of the game as Guman scored a Super raid to give Patna a five-point lead over their opponents, but Aslam turned the tides in the very next raid with an amazing escape picking up four points for his side. Both the teams were very close to each other at the end of the first half, with the Pirates leading the contest by 18-17 heading into the second half.

Guman and Sachin were all over the Puneri Paltan in the second half and the duo along with their defenders inflicted a quick all-out on their opponents in the opening moments of the second half. The Pune-based franchise looked like they were trying to go for one point in the league table as they tried to bring the point difference under seven points but Patna hammered them down with another all-out in the closing minutes of the game to close the curtains on their opponents.