Matchday 34 of PKL 9 starts with Jaipur Pink Panthers taking on U Mumba at the Shiv Chatrapati Sports Complex in Pune on Tuesday in Match 80. Bengaluru Bulls and Telugu Titans will close out the evening in a fierce encounter as only one more matchday remains in the Pune leg of the tournament.

Jaipur Pink Panthers sit in the second position and can go upfront if they win their match against fifth-placed U Mumba. They have 43 points from 13 games and are only one point behind the league leaders Puneri Paltan.

U Mumba is in the fifth spot but has played a game less with 38 points in their bag. The Mumbai-based side has won only once from their last three encounters, losing the other two by a margin of three points.

Bengaluru Bulls occupy the third spot with 41 points from 12 games but can leapfrog to the top position if other results go in their favour. They have only one win to their name from the last three games and lost the other two by two-point margins.

Telugu Titans sit rock bottom with nine points from 13 matches. There is a 22-point gap between them and the eighth-placed Gujarat Giants, so they are all but certain to finish in the last spot.

Jaipur Pink Panthers are fresh off a 25-point win over Dabang Delhi, having notched up four All-Outs in that game. Arjun Deshwal and Rahul Chaudhari both had 13 points to their name in the match while Sunil Kumar, Shaul Kumar, and Ankush narrowly missed their High Five with one tackle point.

U Mumba’s Guman Singh picked 13 raid points in their last game against Puneri Paltan while Rinku responded with four tackle points. Guman’s performance means either one of Ashish, Jai Bhagwan, or Heiderali Ekrami would have to sit out.

The last time these two sides squared off against each other, U Mumba fell behind by three points with the final scoreline reading 39-42 in favour of Jaipur Pink Panthers. Arjun Deshwal was the star performer of the night with 15 raid points to his name while Ankush responded with a High Five of his own.

The contest between the two sides promises to be an exciting one but given the Pink Panthers’ edge over U Mumba in their previous encounter, we predict Jaipur to come out on top.

Bengaluru Bulls have lost a bit of steam, winning only thrice in the last five games. A three-point win over the Haryana Steelers courtesy of their defensive solidarity helped them cross the line. Mahender Singh notched a High Five while Saurabh Nandal and Aman had three tackle points to their name.

Telugu Titans have been the perennial punching bags this season, just like last year when they finished with 27 points from 22 games. Moreover, it looks tough that they can breach that mark this time.

They were thrashed by 11 points against UP Yoddhas as Siddharth Desai’s 11-point heroics went in vain. No support from other raiders and the defenders picking only 10 tackle points allowed the Yoddhas to inflict two All-Outs in the game.

Bengaluru Bulls beat Telugu Titans by only five points in their opening match of the season. Their defenders – Mahender Singh and Saurabh Nandal – combined to score eight points between each other to nullify Virender Singh and Rajnish Dalal’s combined 14 points in the raiding department. With Rajnish out of the season due to an injury, the problems only compound for the Titans.

The Titans are on a 10-match losing streak and it doesn’t look like they can turn the tide against a resilient Bengaluru Bulls. Hence, we predict the Karnataka-based side to come out on top. 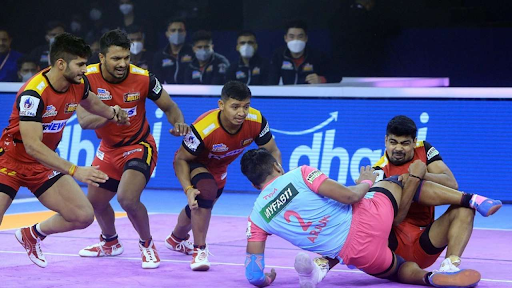 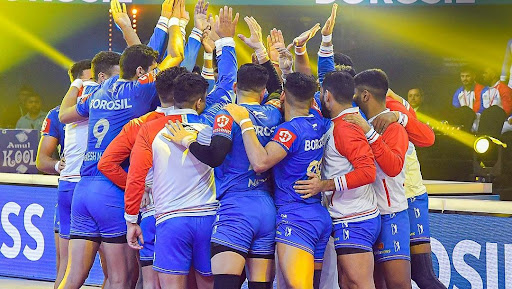