The Matchday 20 of PKL 9 saw Bengaluru Bulls extend their stay at the top with a 37-31 win over Jaipur Pink Panthers at the Shree Shiv Chhatrapati Wrestling Hall in Pune. In the second match of the night, ninth-placed Tamil Thalaivas scored an upset over second-placed Dabang Delhi with a 49-39 victory.

By the end of the Sunday double-header at Week 4, Bengaluru Bulls have 34 points from nine games and have a six-point lead ahead of second-placed Dabang Delhi at the top. Jaipur Pink Panthers remain in the third spot with 27 points from nine matches but they have closed down the gap to just one point.

Dabang Delhi’s inability to close out the game by less than a margin of seven means they have only 28 points from 9 games. The likes of Puneri Paltan, U Mumba, and Gujarat Giants have a game in hand and can tumble them further down the pecking order.

Tamil Thalaivas catapulted from the tenth to the ninth spot after their win as they now have 20 points from eight games. A top-six finish is not far behind as only four points separate them and the sixth-placed Gujarat Giants.

Bengaluru Bulls picked their fifth win in a row as they beat Jaipur Pink Panthers 37-31 in a topsy-turvy encounter. The Bulls’ defenders paralyzed the Panthers raiders and quickly reduced them to two men in the opening exchanges of the game. Bharat entered the opposition half in a Do-or-Die raid and cleaned up the remaining two defenders to inflict the first All-Out in just seven minutes.

The Bulls extended their lead from seven to ten points before Bhavani Rajput completed a Super Raid to bring down the margin to five. Arjun Deshwal further picked up two touchpoints in a Super Tackle position before the Panthers defenders pinned Sachin to inflict the first All-Out on the Bulls. Deshwal’s bonus before half-time ensured the scoreline read 19-19 at the stroke of half-time.

The see-saw battle between the two sides continued till the 35th minute with the scoreline reading 27-27. Vikash Khandola escaped from the clutches of Sunil Kumar and Reza Mirbagheri to give Bengaluru a three-point lead with just two minutes remaining. However, Sahul Kumar and Reza combined terrifically to pin Bharat in a Super Tackle and restore parity in the 39th minute.

The Panthers were unable to keep all their men afloat in the mat till the end as Vikash Khandola stretched his dangling hand past the mid-line in the final minute of the game. Jaipur played a high line of defense to win quick points but the Bengaluru raiders were smart to escape from the clutches. 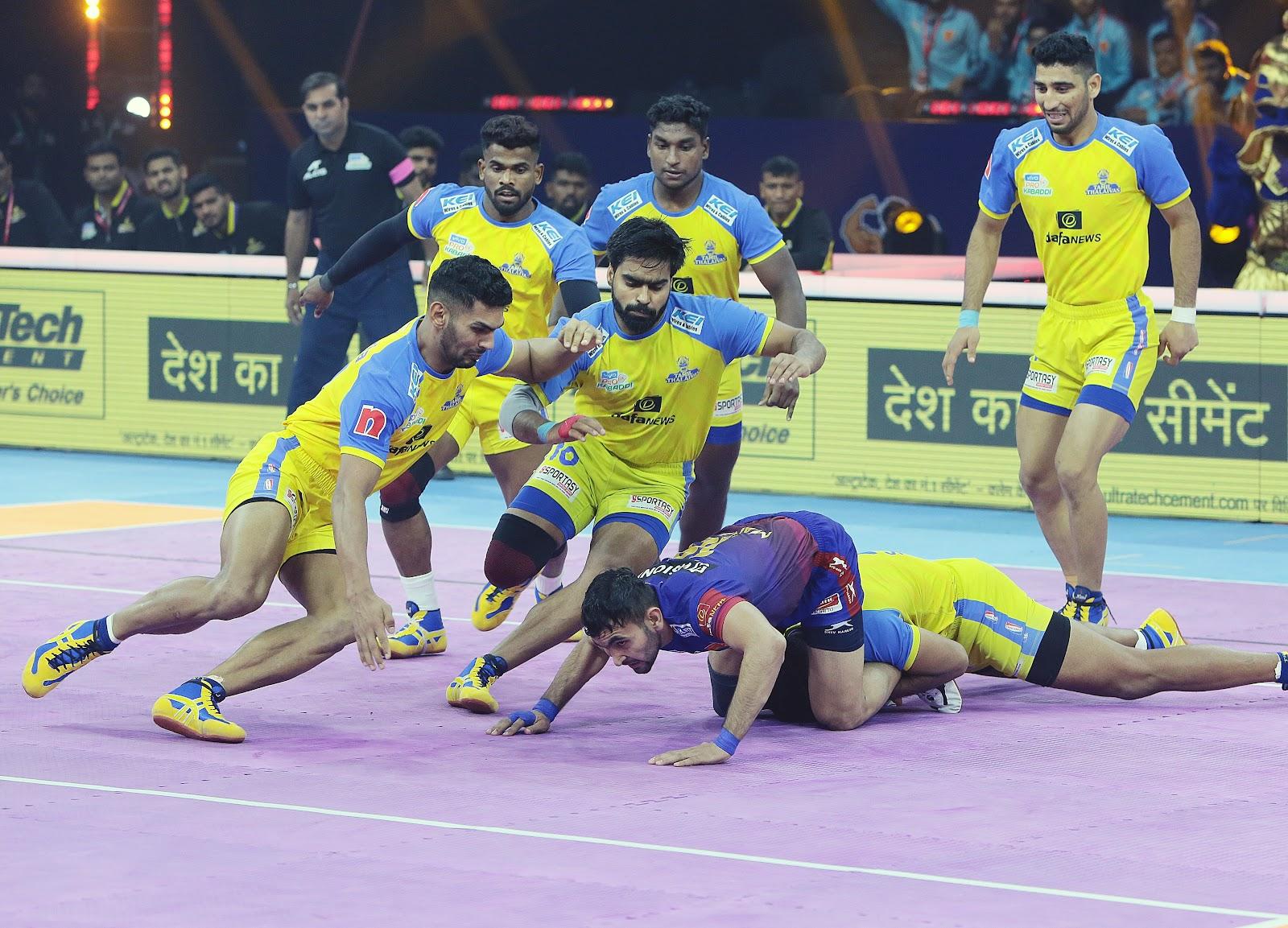 Tamil Thalaivas raider Narender made his intentions clear when he bagged a Super Raid in his team’s first raid. Sahil Gulia’s tackle on Naveen Kumar sent the latter on the bench as Narender and Ajinkya Pawar dealt the damage upfront to inflict the first All-Out in just ten minutes and Thalaivas had an eight-point lead.

Narender continued from where he started as he picked up solo raid points one by one to inflict another All-Out on Delhi. The scoreline read 21-5 at the moment with plenty of time remaining. Narender replied with another Super Raid to clean up Vishal, Vijay Kumar, and Amit Hooda as the Thalaivas inflicted the third All-Out in the first half. The score at half-time read 32-11 as Delhi found themselves 21 points behind with zero points from their defenders.

The problems for Delhi compounded in the second half when Naveen Kumar was substituted from the game due to a back injury. Ashu Malik slowly and steadily picked touchpoints for Delhi in Naveen’s absence and inflicted the first All-Out on Thalaivas to reduce the margin to 14 points.

Ashu Malik notched another Super Raid for his side but last man Narender delayed the inevitable for quite some time by winning single raid points to revive his teammates.

Delhi managed to inflict the second All-Out in the nick of time but wasn’t enough to reduce the deficit. Narender’s 24 points from the game proved to be the difference between the two sides as Ashu Malik’s Super 10 went in vain.