The difference between the table-toppers and bottom-placed teams is getting closer game by game as many underperformed sides are awakened and the Kabaddi action is also getting intense. The Matchday 23 of PKL 9 will be held at Pune Leg’s solitary venue Shree Shiv Chhatrapati Sports Complex in Pune on Wednesday from 7:30 PM onwards.

Another Maharashtrian outfit U Mumba will be enjoying the massive support of the home crowd while taking on the challenge of 12-place standing Telugu Titans this Wednesday. Then the stage will be occupied by Mighty Maninder of Bengal Warriors who will be up against the supercharged Tamil Thalaivas side.

Match 54: U Mumba vs Telugu Titans

At this point, nothing has been going in the favor of the Titans no matter how much they are toiling hard to thrive. On the other hand, the young brigade of U Mumba thumped the seventh-edition champions Bengal Warriors in their previous fixture to climb to the fifth position in the standings having 26 points in the bank. The stalwart defender Rinku Sharma delivered his personal-best scoring 8 tackle points while the left-corner Mohit also showcased a breakthrough performance of 7 tackle points.

The head-to-head record of this throbbing rivalry is dominated by the first-ever fortress of Pro Kabaddi, U Mumba by 8-4 out of 14 encounters. The second-edition champions have shown immense dominance in recent times and also completed a double over the Titans in the previous season which was their worst-ever PKL campaign. In fact, the Black and Yellows are yet to register a triumph over Mumba since the year 2017.

Current U Mumba skipper Surinder Singh also led the Titans battalion multiple times in Season 8 when their first-choice captains Rohit Kumar and Siddharth Desai were unavailable. Telugu’s raiding unit features two big names ‘Bahubali’ Desai and Abhishek Singh who were once part of the Mumba roster together in Season 6.

The UP-born assailant Abhishek who was the top-scorer of the Mumbai-based franchise for the past couple of seasons can now be seen marching the banner of the Titans.

The Iranian raider Heidarali Ekrami may lose his place in the Starting Seven to Ashish Narwal after not being able to capitalize on it against Bengal. Ashish who came onto the mat from the substitute bench in the 16th minute scored quick eight raid points at a strike rate of 67%. Mumba’s strike raider Guman Singh was able to fetch only a single point previously and must be aiming to excel and forget it as early as possible.

Telugu’s experiment of promoting the young duo of Nitin and Mohit to the Starting Seven failed miserably as we may see the return of Surjeet and Parvesh Bhainswal in the cover positions. The Titans raiding trio that kick-started the Mumba game could manage to make a combined tally of just four raid points. We may get to see more from the right-corner defender Ankit Sharma who featured for the only last 10 minutes and finished it off with two Super Tackles and 6 tackle points under the helm.

Coach Anil Chaprana has received wide praise for taking the low-profile squad into the Top 6. And without a second doubt, captain Surinder and his MumBoys are the favourites to claim all five points when the full-time whistle is blown by the referee. 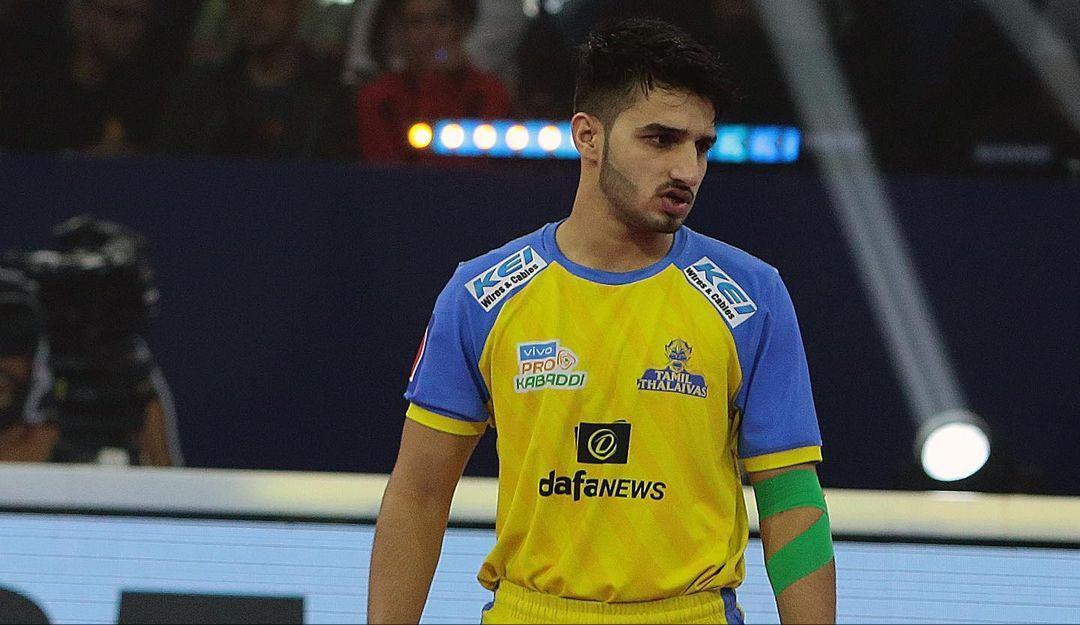 The newest Chinna-Thala in the town!

Despite being favorites in their previous game, the Warriors surrendered before Mumba and also missed out on the solitary consolation point. Bengal skipper Maninder Singh once again failed to achieve the individual milestone of Super 10 while their in-form defender Girish Ernak also remained pointless throughout the play.

The Thalaivas played Dabang Delhi in their most recent appearance and finished it off by thrashing the defending champions by 10 points in a high-scoring saga. In the presence of so many elite names like Naveen Kumar and Ajinkya Pawar, it was the Khelo India product Narender Kandola who stole the show fetching 24 points consisting of 16 touches, 7 bonuses and a solitary tackle point.

The resurrected Tamil Thalaivas side will be gracing the mat with the ultimate aim of breaking Bengal’s winning streak of eight straight matches against them. The Chennai-based outfit has not enjoyed the taste of victory over the Sky Blues since their debut season which also stands as their only triumph in this rivalry. When the last time these two franchises shared the battlefield, the clash resulted in a one-sided saga in the favor of the Royal Tigers with a 31-point victory.

The legendary all-rounder Deepak Niwas Hooda has failed to live up to his reputation this season and also seemed clueless many times. Bengal gaffer K Bhaskaran can replace the weakest link of his side with someone like Manoj Gowda or Ajinkya Kapre who have shown their mettle in the limited opportunities recently. Girish may have had a forgettable outing in the previous game but the Maharashtrian veteran deserves to be in the lineup for holding the Orange Sleeves for a long time.

Despite the absence of Pawan Sehrawat, the reassembled Thalaivas squad under the guidance of Ashan Kumar looks well-established. The baby-faced assassin Narender Kandola is ready to lead the Yellow and Blues for another prowess after scoring a whopping total of 37 points from his last two appearances. Meanwhile, the familiar faces Ajinkya Pawar and Himanshu Yadav are also playing the roles of supporting raider to Narender exceptionally well.

Three losses from the last four games have pushed Bengal on the back foot while the Tamizhan Bosses are on the rise after winning two in two matches. The key aspect of the current form states that the Thalaivas from the land of Tamil stand with brighter chances to emerge victorious from this contest.