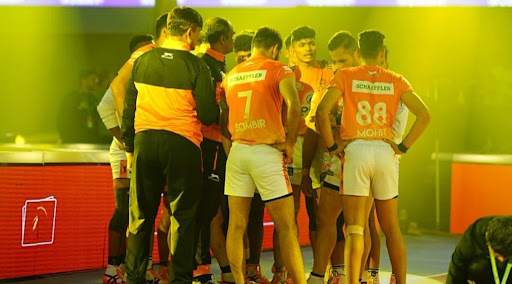 Fazel and his Paltan registered their triumph in front of home fans!

Home team Puneri Paltan thrashes down Dabang Delhi by four points to hand the defending champions their fifth defeat in a row. Meanwhile, the five-match unbeaten streak of the table-toppers Bengaluru Bulls was also broken by Haryana Steelers on the auspicious occasion of their State Formation Day.

The ‘Parimatch News‘ brings you a detailed roundup review of two Matchday 22 fixtures of the Pro Kabaddi League Season 9.

The right-cover Abinesh Nadarajan who was their highest-scoring cover defender of the previous campaign received his first start of this season. The Paltan earlier issued an official announcement through their social media handles that their strike raider Aslam Inamdar has suffered a minor injury and will be unavailable for the upcoming few games. Delhi skipper Naveen Goyat still made it to the Dabang Starting Seven despite the injury scare that occurred against the Thalaivas.

The Naveen Express commenced the action with a clean escape and dismissed Abinesh Nadarajan on his way back to the midline. Pune wasted no time as the baby-faced assassin Mohit Goyat scored a Super Raid in the very next raid which was also a do-or-die attempt. As a consequence of that acrobatic Super Raid, the Paltan inflicted an all-out on the defending champions in just the eighth minute of the play. 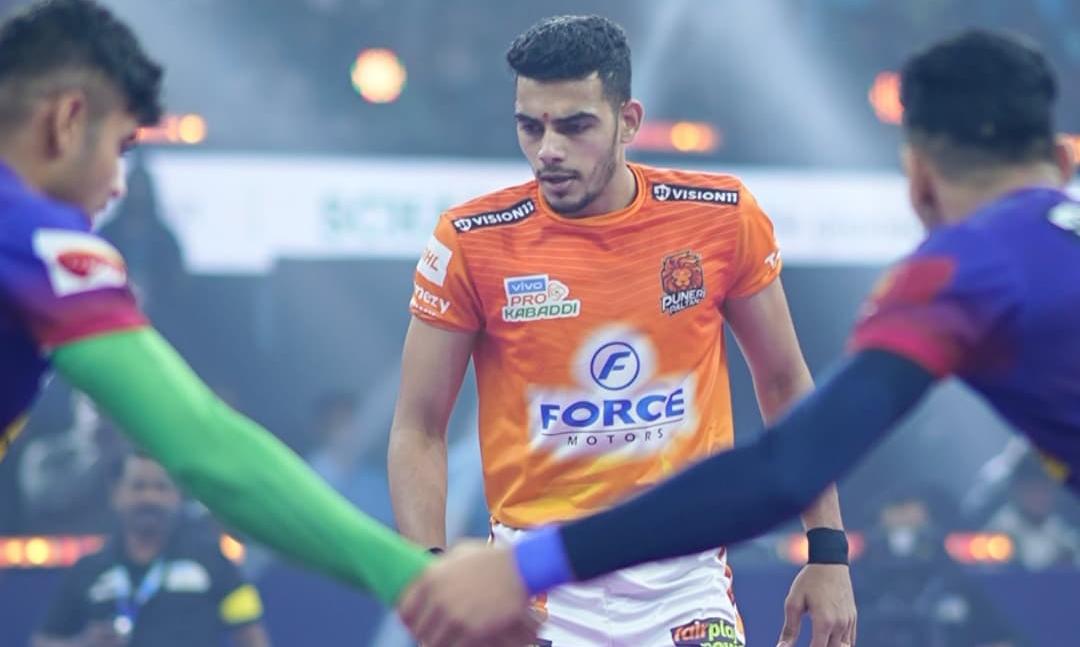 Mohit lighted up the stage with another Hit performance

The following minutes saw Dabang Fauj’s offensive unit making diligent efforts to revive themselves but a composed approach from Pune kept them ahead of their counterparts. Delhi was aiming to slow down the pace of the game but then the Marvelous Mohit went on to score another Super Raid which strengthened their commanding position furthermore. Three raid points and two extra points in the single raid helped the Orange Stallions to force the second Lona of the match.

The Capital-based franchise kick-started the second half trailing by six points which was decreased by three points in the very first raid. As the last-man-standing Mohit surrendered before Naveen and the Dabangs took one all-out back. Just when we thought that Pune will be going defensive to protect their tiny lead, Akash Shinde stunned everyone with the third Super Raid of the game.

Naveen made a robust Super Tackle effort but couldn’t save his side from the wrath of the opposition raider for a longer time and got bundled out for the third time. A masterstroke of playing on the third raid was executed by captain Fazel Atrachali and his boys which prevented Delhi from going closer to their lead. Despite Fazel not being present on the mat for the last minute, the defense did not panic and sealed it for Paltan at the final scoreline of 43-38.

Another losing outcome for the Dabangs where their raiders left no stone unturned but the fans were left disappointed with the performance of the defense department. Mr Consistent Naveen once again achieved his individual Super 10 scoring 14 raid points however, he was able to revive his teammates only eight times. The Delhi defense fetched a tally of nine tackle points but the high number of unsuccessful tackles eventually cost them four match points.

The Nashik-boy Akash Shinde who replaced Aslam in the Pune lineup delivered a breakthrough performance scoring his Pro Kabaddi career’s maiden Super 10. The Iranian starlet Fazel Atrachali proved why he is tagged with the nickname ‘Sultan’ after scalping four match-defining tackle points. In the absence of Inamdar, it was Mohit Goyat who stepped up as Pune’s strike raider and also claimed the Moment of the Match award for pulling off two Super Raids. 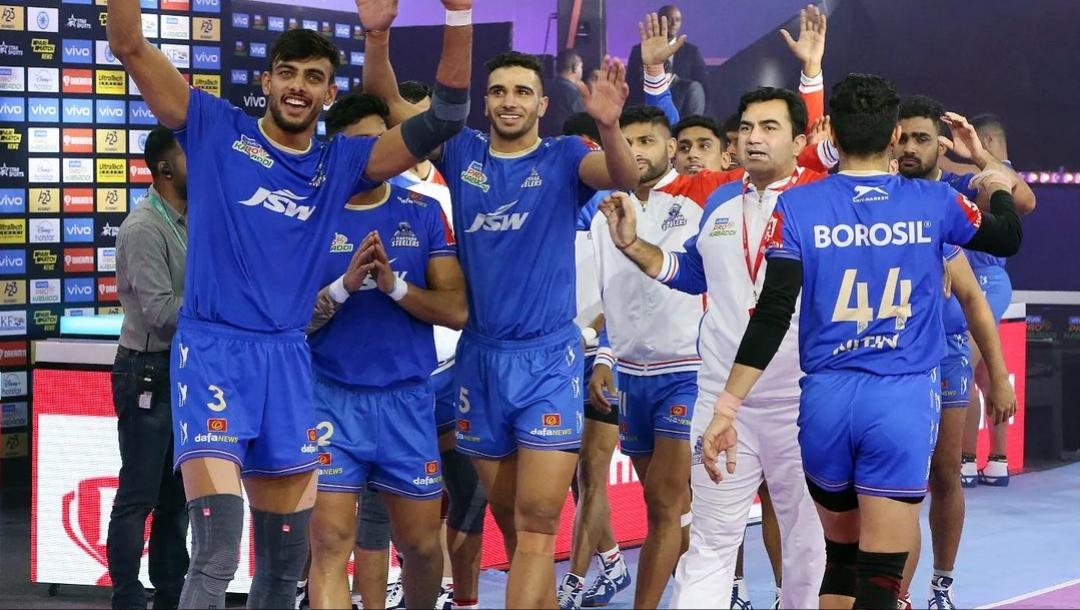 A perfect way to celebrate The Haryana Day

Bengaluru gaffer Randhir Singh Sehrawat named an unchanged Starting Seven from the previous fixture to avoid any changes in the winning combination. Meanwhile, the opposition coach Manpreet Singh also made only a single change in his lineup after recently gaining positive momentum. It was a like-to-like change from the Steelers as the experienced assailant Rakesh Narwal replaced another veteran K Prapanjan.

Meetu Sharma went for a do-or-die raid and returned with two points from an acrobatic Lion Jump in his first offensive appearance of the match. A quick reply to Meetu’s multi-point effort came from another in-form raider Bharat Hooda who attempted a two-pointer raid cosily. Despite the hype of this clash being a raid-centric one, the defensive units of both sides thoroughly dominated their counterpart departments.

When the clock crossed the mark of 10 minutes, the Steelers steadily started affirming their commanding status in the game. However, the Haryana raiders continuously failed to break a four-man defense of Bengaluru which was finally broken in the 15th minute. The veteran raider Rakesh Narwal turned up for the Blues’ final raid of the half and fetched two touchpoints to give his team a valuable three-point lead at the half-time whistle.

The Bulls were down to only two men at the court during the commencement of the second half and could hold all out only for a further two minutes. The Panchkula-based franchise finally got their much-awaited first Lona of the match to make it a seven-point lead. A time-out was taken by both coaches right at the time when 10 minutes were left to instil a different strategy for the remaining play.

Bharat made a comeback to the battlefield and initiated the Bulls’ revival through his back-to-back successful raids at an ease. The Haryana left-cover defender Jaideep Dahiya finally deadlocked Bharat for a Super Tackle to regain momentum in the decisive moment of the clash. The Steelers managed to postpone their all-out dismissal to the final raid of the match to edge out the Red and Blacks by 2 points in order to claim all five match points.

We all were expecting this clash to be a paradise for the raiders of Bengaluru Bulls but what happened in those 40 minutes was a whole different story. Especially the towering raider Bharat Hooda who may have accomplished his Super 10 but stayed out for half of the time which did a lot more damage. The Great Wall of Bengaluru started the game well but couldn’t sustain it further and could only score two tackle points in the second half.

The Iranian right-corner defender Amirhossein Bastami finally gave a justification for his ground-breaking auction price after scoring his first High 5 in this league.  Jaideep Dahiya with four tackle points at an astonishing strike rate of 80% also made it tough for the opposition raiders to cope. The Services lad Manjeet Dahiya fetched only four raid points but all his raiding breakthroughs came in the crucial moments which prevented them from bottling it in the end.