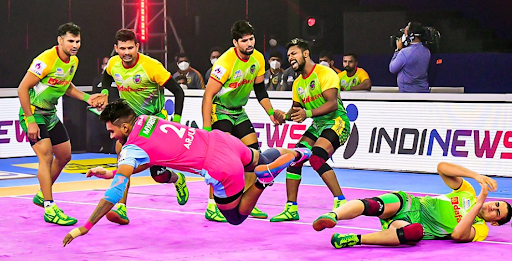 The Jaipur Pink Panthers handed Patna Pirates their biggest defeat of the season as they humbled their opponents 30-51 in the 83rd contest of the Pro Kabaddi League Season 8 here on Sunday at Bengaluru’s Sheraton Grand. Arjun Deshwal was the star of the show for the inaugural champions as he bagged seventeen points in the game, registering his tenth Super 10 of the season.

The Jaipur-based franchise was all over the Pirates from the early get-go and never gave them a chance to make a comeback into the game. Arjun was electric on the mat tonight as Jaipur’s strike raider wreaked havoc on the Patna-based team racking up point after point in his raids to leave the team vulnerable to all outs all throughout the contest.

None of Patna’s playing seven were able to leave a remarkable impact in the game, with raider Guman Singh fetching eleven points to his name, emerging as the team’s best performer of the night. Patna’s defense could only manage six tackle points in the entire game and that proved to be one of their major downfalls in the game.

On the other hand, the Pink Panthers were excellent both in offense and defense as they picked up fourteen tackle points over their opponents and three all-outs which turned out to be the deciding factor of the game.

The Jaipur-based franchise started the game with a quick pace that threw Patna off their game in the early moments of the game. Arjun and Deepak Niwas Hooda never gave their opponents a chance to breathe for the entirety of the first half, as they kept the high-paced game running, making it hard for the opposition to recoup and counterattack. 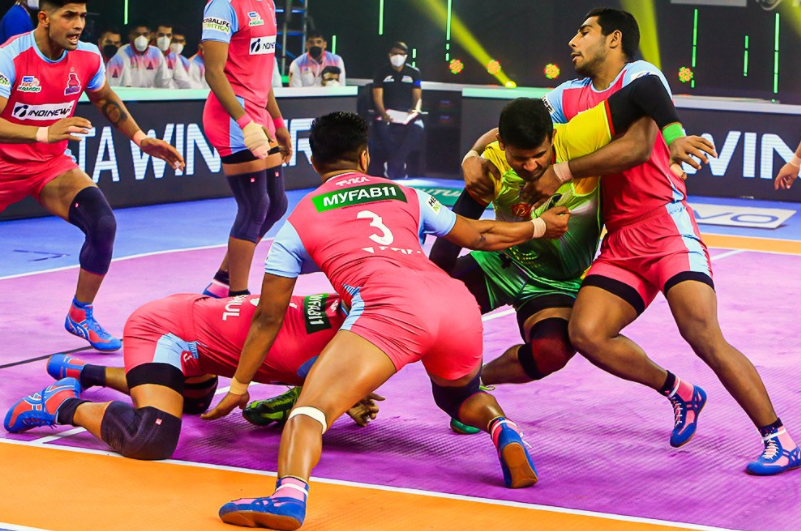 Jaipur registered two all-outs within the first half of the game and held a staggering fourteen-point lead over the Pirates leading into the second half, with scores 11-25 at the end of the first twenty minutes. Vishal and Sandeep Dhull worked in perfect sync alongside each other and racked up a Thigh 5 each to their name ensuring none of the Pirates could make a dent against their side.

Guman Singh was a glimmer in the dark for the Patna-based franchise as the raider managed to overturn the domination for a few minutes but did not receive any support from his skipper, Prashant Kumar Rai and strike raider in Monu Goyat, as the duo could only pick a total of seven points.

The Pink Panthers will surely be thrilled with their victory over the Pirates and use their momentum heading into their upcoming match against Dabang Delhi K.C on Thursday in their fifteenth appearance of the season. On, the other hand the Pirates will look to regain their lost composure as they still have the chance to finish at the top of the table with a one-game advantage over the current leaders in Dabang Delhi.

The franchise and fans will hope that players can dig deep into their reserves and find their best as they face U.P Yoddha on Tuesday in their highly awaited rematch this season.